Eileen Cooper RA is an artist known for her commitment to figuration. Cooper studied at Goldsmiths College (1971-74) and the Royal College of Art (1974-77) and has taught at many art schools from St Martin’s to the Royal Academy Schools, where she was elected as a Royal Academician in 2000 and then served as Keeper of the Royal Academy in 2010-17, where she was the first women to be elected in the role since the RA’s beginnings in 1768.

She was made an Officer of the British Empire (OBE) for services to Art and Art Education in 2016. Her commitment to the development of emerging artists continues to be a particular focus. She is an Honorary Fellow of the Royal College of Art, and of Murray Edwards College, University of Cambridge, and was awarded an Honorary Doctorate from Southampton Solent University in 2014. 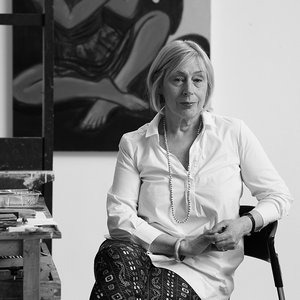