David Caldwell is a painter. He was born in Helensburgh on the West Coast of Scotland and studied at the Glasgow School of Art from 1994-8. He went on to study at The Prince's Drawing School (now the Royal Drawing School) from 2003-5. David exhibits regularly and has recently had work selected for the BP Portrait Award, Threadneedle Prize, ING Discerning Eye, Ruth Borchard Self-portrait Collection, Lynn Painter-Stainers Prize and the Royal Society of Portrait Painters. He has been the recipient of several awards and residencies, most recently the Royal Drawing School's Moritz-Heyman Residency, Italy (2014), The Founder's Purchase Prize at the Discerning Eye (2011), and the Bulldog Bursary at the Royal Society of Portrait Painters (2010). David lives and works as an artist in London. 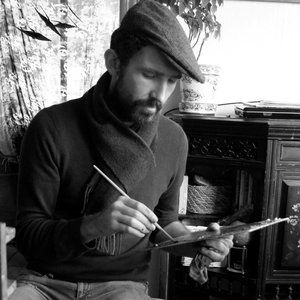