John Lessore was born in London in 1939 and grew up in a family of practising artists. He went to the Slade under Coldstream, 1957 to 1961, and then to Italy on an Abbey Minor travelling scholarship. His chief teachers were his mother, who was the painter Helen Lessore, and Tom Monnington. John was a co-founder of the Royal Drawing School in 2000 and was a trustee of The National Gallery, London, from 2003-11. He taught from 1965 to 1999 at the Royal Academy Schools and from 1978 to 1986 he co-ran the Life Room at Norwich School of Art with John Wonnacott. John's work is in many private and public collections including Tate, The British Museum and the Royal Academy. Major recent commissions include the double portrait of Jeremy Dixon and Edward Jones and the group portrait of Six Paralympic Athletes, both in the National Portrait Gallery. He lives and works in London, East Anglia and France.

I learnt what little I know about drawing volume and movement from Tom Monnington; about tone, light and composition from my mother; about anatomy from a Handbook of Anatomy for Art Students by Arthur Thomson 1896 and about selection from painting from drawings – you know immediately what you left out that you needed and what you put in that you didn’t. 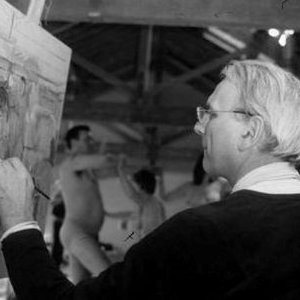