Born in Cambridge in 1966, Robert Fawcett attended Cambridge College of Art (1984 – 1985), Byam Shaw School of Art (1985 – 1988) and the Royal College of Art (1990 – 1992). Robert has exhibited prints, paintings and drawings for shows at The Mall Galleries, London; Temple Gallery, Paris; Duna, Barcelona; Terrence Rogers Fine Art, Santa Monica; and Malborough Graphics and The Forum Gallery, New York. He has been included in a touring exhibition of the US: Modern Portraiture and has had solo shows with Jill George Gallery, London. He has also received numerous awards, including the Daler-Rowney Prize, Neville Burston Award and Elizabeth Greenshields Foundation twice. More recently he was selected for the John Moores Painting Prize 2014 and the ING Discerning Eye.

As a painter and a printmaker drawing has been an essential part of my process and is always my starting point. It is the simplicity and the immediacy of drawing that makes it so valuable: I can rapidly explore the potential of multiple ideas before committing to any one. The speed with which different permutations can be developed also allows me to get to grips with formal problems of scale and composition from the outset. And the acute observation that drawing requires allows me to accumulate a reliable body of information that I would not get from photographs alone. 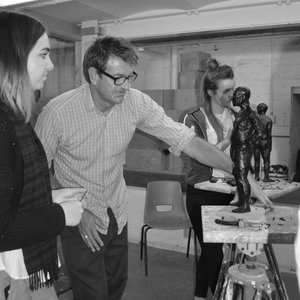