As a student from the Drawing Clubs I was lucky enough to be on a work experience placement for one week at the Royal Drawing School’s Shoreditch studios. During my placement I was given the opportunity to see the brilliant David Hockney exhibition at the Dulwich Picture Gallery and review it for the School blog. I had never previously heard of David Hockney or seen any of his prints, so this would most definitely be an eye-opening experience. 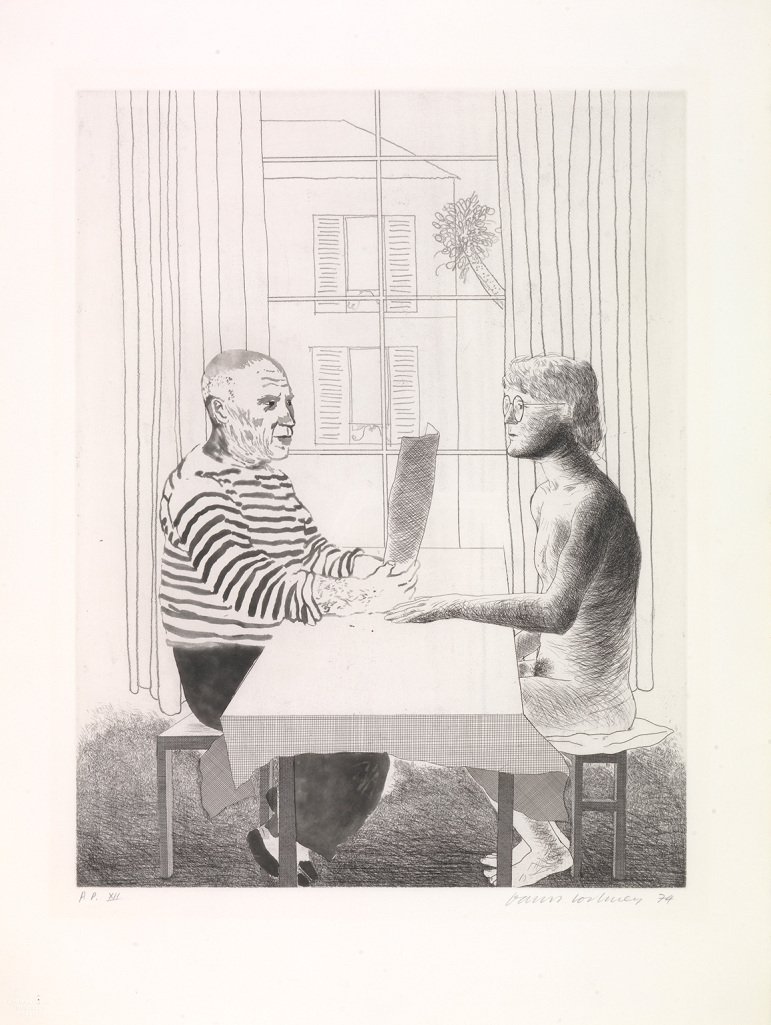 ‘Artist and Model’ by David Hockney

The exhibition covers a great range of his work, celebrating 60 years since his first print. Walking through the gallery you really begin to gain a greater perspective as to how he developed and changed his style of printing. The exhibition included some of his most well known series of works, from A Rake’s Progress (1961-63), to some of his later works like The Weather Series (1973).

I read the notes for each image in the exhibition, and I found the comment made for The Weather Series (shown below) most interesting . Hockney explains that, ‘the prints here of the wind, for instance, I couldn’t quite figure out how to do wind, I made a visual representation of wind, because normally only the effects of wind show themselves’. His representations of the weather are so simple, and therefore create a bold, and in some cases a dramatic impact.

I chose to sketch some of the prints I liked best, two of which are from The Weather Series, these being Wind and Lightning.

‘Lightning’ and ‘Wind’ from The Weather Series by David Hockney

One thing I noticed from Hockney’s first collection of prints was the lack of colour. I later found out from the notes of his later, more ambitious prints that he avoided using colour in his etchings, because for his first ten years of printing he found the technique too difficult. Hockney only started using colour in 1973 when he began working with Aldo Crommelynch, a Belgian living in Paris. I decided to do some background research after the exhibition, and found out Aldo Crommelynch is renowned for being one of the most successful Master Printers of the 20th century. He collaborated with some of the most influential artists, like Matisse, Picasso and Miro.

After mastering Crommelynch’s intaglio print style he created The Blue Guitar print, a copy of Picasso’s earlier painting The Old Guitarist, which in my opinion looks almost identical to the original. It wasn’t a surprise when I also found out that Picasso is Hockney’s hero. 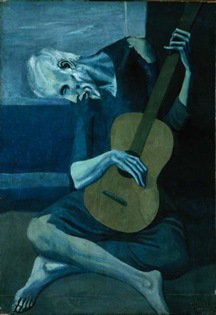 'The Blue Guitar' by Pablo Picasso 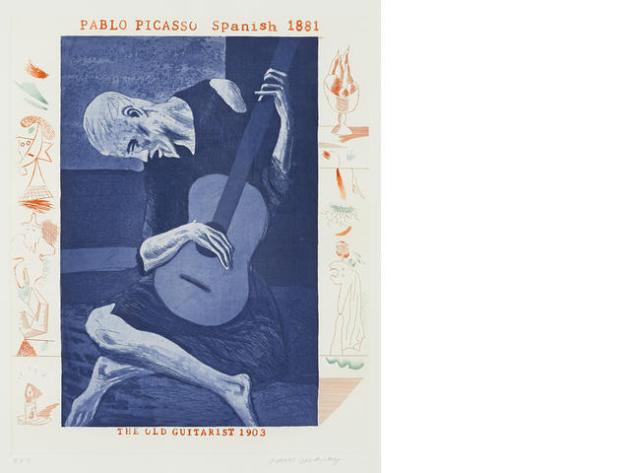 'The Blue Guitar' by David Hockney

After viewing all of Hockney’s Prints I decided to spend some time sketching one of the prints I liked best, and I chose his 1998 Self -Portrait. The etching conveys a very honest and realistic approach to how he sees himself, and definitely brings the term ‘warts and all’ into mind. He depicts himself as very rough around the edges, with a scruffy beard, wrinkles on his hand, under and around his eyes. Overall it portrays the many signs of ageing.

The Hockney exhibition is a brilliant one to go and see, it’s opened my eyes to the world of printing, and the amount of skill, time and effort involved. I learnt so much more than I first expected and would like to see many more prints from David Hockney in the future. Printing is an art I will use much more from now on.