Jack McGarrity is the 2021/22 recipient of the Sir Denis Mahon Award. Presented annually to an outgoing Drawing Year student, the award supports them in making new work and developing their practice, culminating in a solo exhibition in the School’s Shoreditch gallery. Here, Jack reflects on his practice over the past year and how he has found preparing for his exhibition, Something Happening Somewhere. 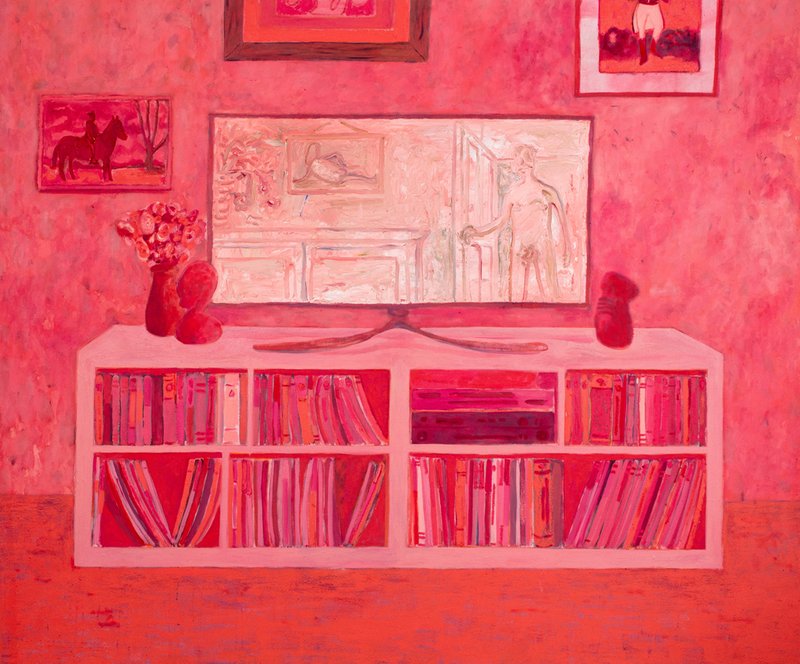 How did you feel when you found out you'd won the award?

I was absolutely shocked to be honest. I hadn’t given the prize much thought as it had never been on my radar that I could win it.

After the initial surprise subsided, what did the prize mean to you?

You know, before the award, I really thought about becoming a fireman. Because the world's bombing and I thought I should do something practical! I didn’t quite know how I could have a practice and a studio and make a living. I always thought my practice would need to be on the side of something else that made money. But, receiving that award was a validation, it meant that being a professional artist was achievable. Suddenly there were more reasons to stay in London, there was a real community from The Drawing Year, and it felt like we were all going to continue making work together, all trying to achieve the same goals. It was exciting, that feeling of possibility. 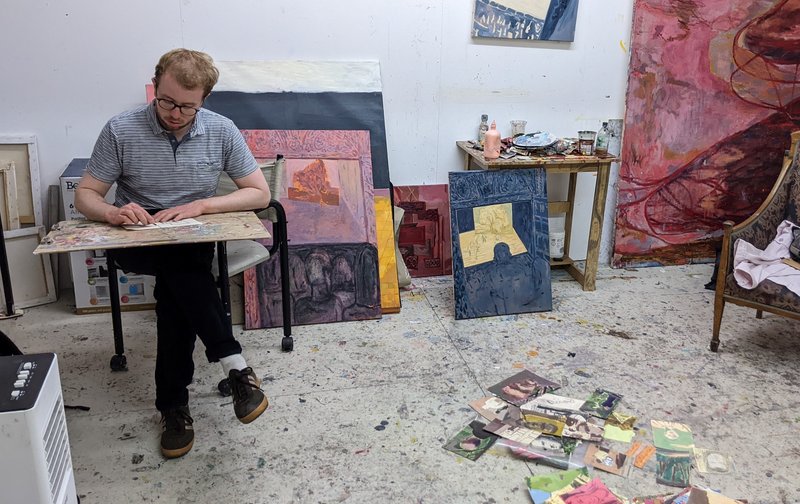 Practically, what has the award allowed you to achieve over the past year?

I've enjoyed having a studio space, and the opportunity and time to dedicate to my practice. I haven’t had to work part time as much elsewhere which has been great. On an average day, I cycle into the studio and for the first half an hour, I sit and look at the paintings. I'll go and get a coffee and then after an hour or so I’ll start doing some little drawings to warm up. It’s usually not until the afternoon I'll start working on the big paintings, but then often I’ll find myself working later into the night, about 5 - 10pm seems to be my most productive period.

I’m always working on multiple pieces at once. On the Drawing Year, especially during lockdown, I got quite into the habit of just doing one piece and working on it until it was finished. But now I’m using oils more, I really enjoy the time they give you. Some pieces were started months ago, and I’d written them off as a disaster, but then I’ll mix up a colour for something else and suddenly decide to try it on one of those. And then it's like a new window into how it can be finished. 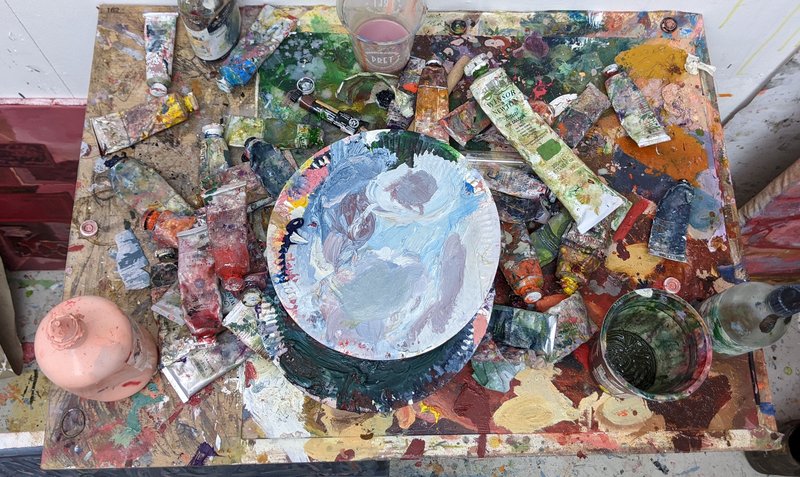 The award money has also directly influenced my practice in a way; I’ve found I don’t need to stress about wanting to work on a larger scale, or the thickness of the paint. You know, paint is pricey! Before, I often made paintings with very thin, washy paint. My work was very monochromatic, and the paintings were on rabbit skin glue, so you could still see the canvas and they were more like large drawings. If something wasn’t working, I would just fiddle and fiddle and it would often end up looking quite dead. But now, if something doesn't work, I can just scrape it off and not worry. I'll often do an under painting with acrylic, then use some oil bars over it. I’d never really used them before this past year – but they’re pretty fun. The colour is vivid, and you can smash them right on or draw with them and they bridge that gap between drawing and painting. So I’ve really liked the freedom of not being as precious with the materials, just trying to use what felt right. I’m hoping that my paintings seem more lively than what I was making before; there's more of an enjoyment in them now, from really embracing the materiality of the process.

The deadline for the show has been a great motivation. Knowing that you're making this work for a reason. After leaving the Drawing Year, this year of creating work has been a great stepping-stone into professional artistic life. 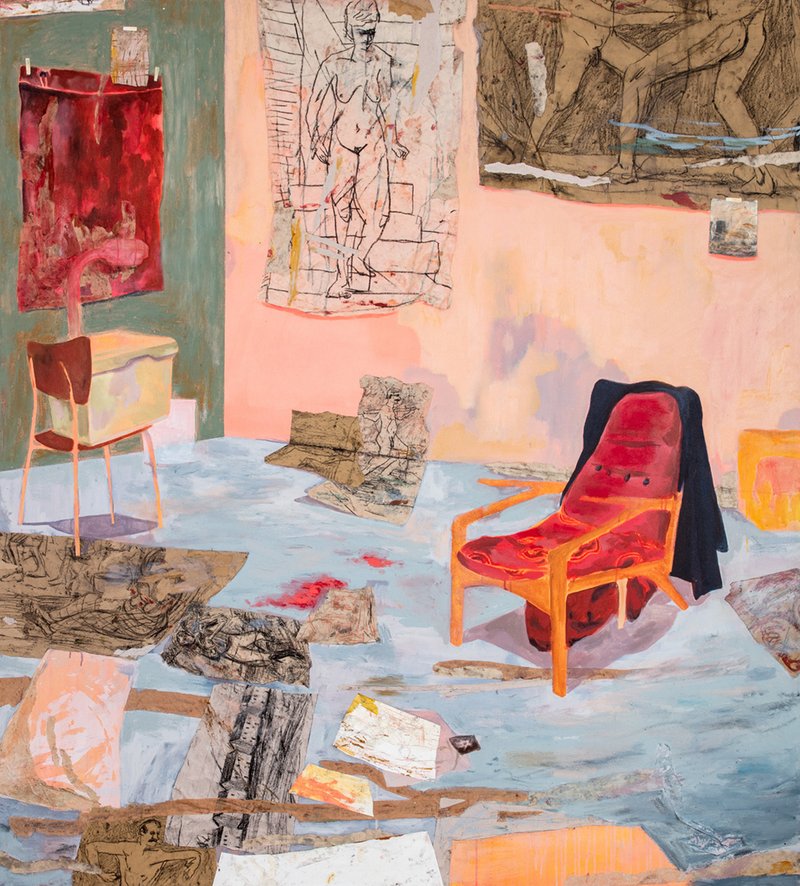 How has your practice changed since being on the Drawing Year?

During that year, you make so much work, and you don't really have time to be very critical of it. I learnt the drive to just keep making work. If you’re stuck - go out and about and just draw something in the park, even if it’s got nothing to do with your work – this helps to spark off ideas and then you'll be excited to go back to the studio.

When I was studying at Glasgow, my paintings were big - two meters tall. But then on the Drawing Year, everything got quite small. During the pandemic, for a while I was working in a spare room at my mum and dad's house, so out of necessity, everything shrunk because it was the only real size I could work on. But, that period of going home was probably the most important couple of months for my work. Before, I'd always thought that everything had to be about these big subjects. I was always trying to read all these books and channel big ideas into painting. Ideas that I probably didn't have a handle on, so it all felt a bit clumsy. But when I went home, I started drawing things around me, purely for fun. I realised that everyday objects can be just as interesting. There can be just as much meaning in small things as there are in big ideas. That realisation has stayed with me, and that's what I've been doing ever since. 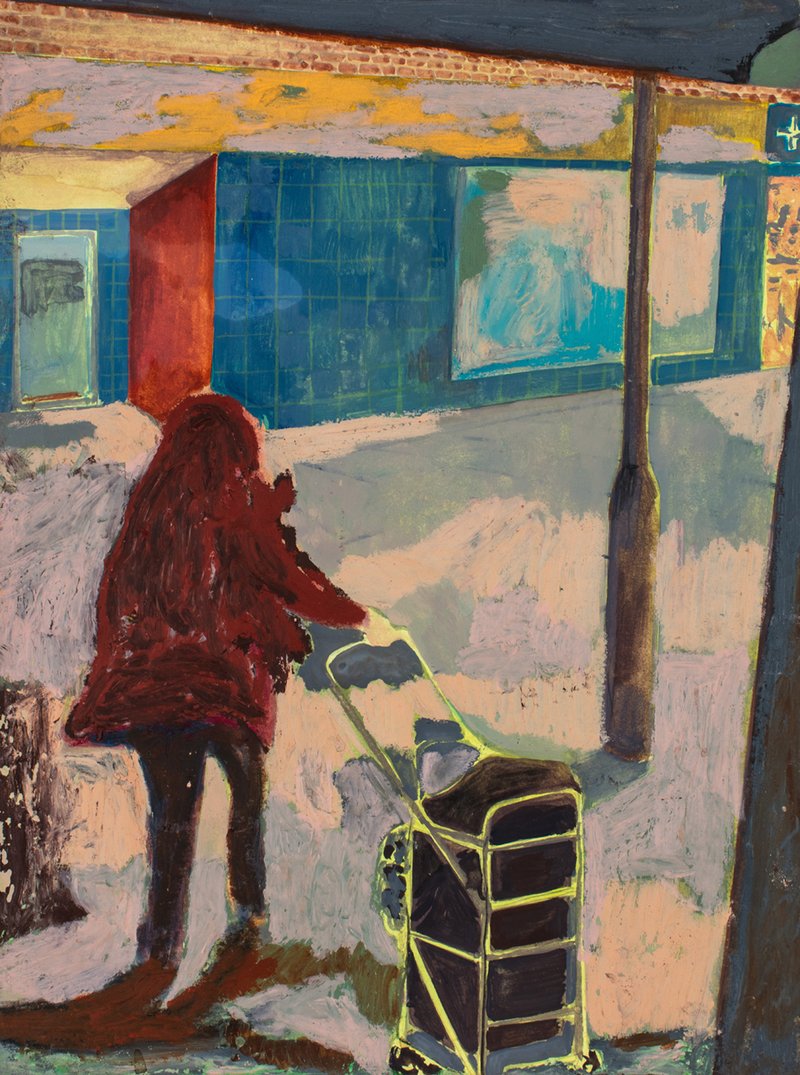 Were there any particular courses on The Drawing Year that influenced your work?

I love watching films, and there’s often little things that will come up that make me think - oh, that'd be quite neat, to look at that as a painting. I took the Drawing from Film course pretty much every term during the Drawing Year. I enjoyed the speed of each class - you only get a couple of minutes to make an image. I think that was the most influential course I did at the School. Again, it's the idea of doing something quickly and not having enough time to be critical of it, then looking at it later to see how it comes out. A lot of the paintings for the exhibition are based on little three minute drawings that I've made from films – I have so many of them from those classes. Even if it's a fantastical film, I’ve found myself drawn to looking at these really quite boring, everyday type scenes in it. One painting is based on the opening scene from The Hills Have Eyes, but I’ve tried to take a lot of the stuff out of it and now it's just a dog looking out a window… I like boring things, I suppose. 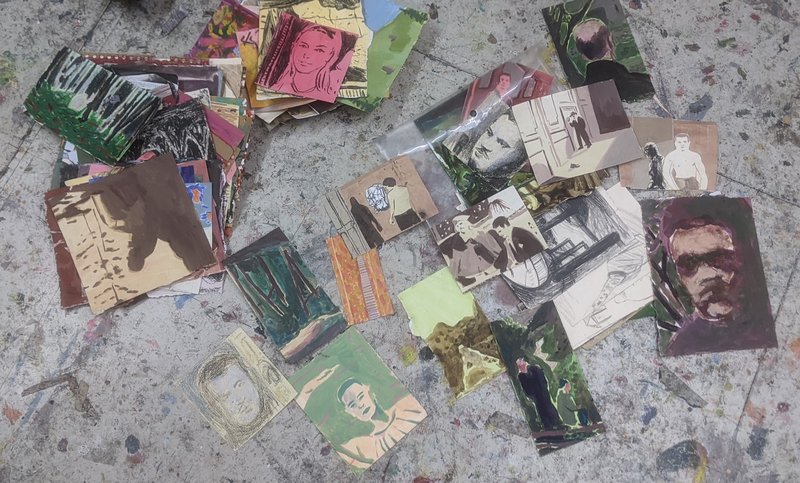 Is there a particular focus to your exhibition?

I’m interested in creating new narratives that explore notions of the absurd, stillness and alienation in the modern world. A lot of the work is a continuation of what I was doing towards the end of the Drawing Year. The last exhibition I saw before the pandemic started was Picasso on Paper. He used wallpaper on canvas and it got me thinking that I could use paper as a kind of medium in itself, which stuck in my head and I made loads of work thinking about it. And it’s morphed into the way that I still work now. I've been getting into the idea of looking at the surface of a painting and how you could disrupt that, for example adding collage, lots of my old drawings. 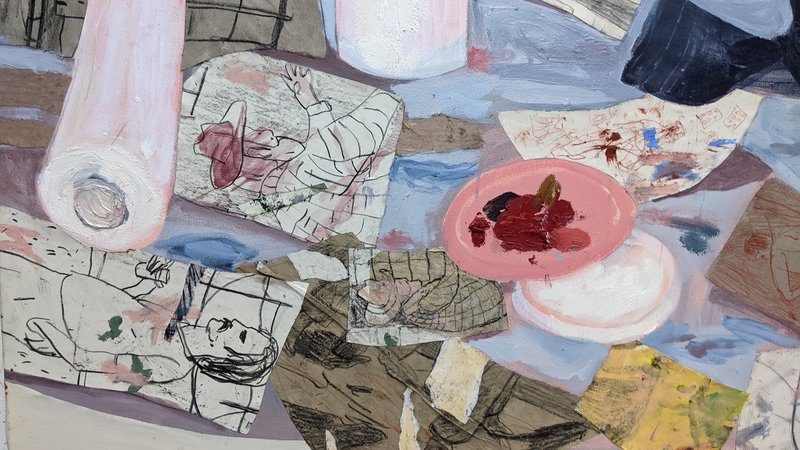 There’s a focus on viewing people through obstructions – through windows, or doors, or seeing small parts of a person. A bit like the way you see people in Tom and Jerry, that’s how I’ve been thinking about it. It's always people in transition, or moving between spaces. That idea of something being on the surface and then something being obscured by it. Multiples within one kind of scene. A lot of my work is influenced by comics and film. In a comic you might have one image, but within that you've got all these different panels with different narratives. In all my paintings of the studio, they have similar threads running through them, or they might contain little drawings that were the initial sketches for one of the larger paintings. 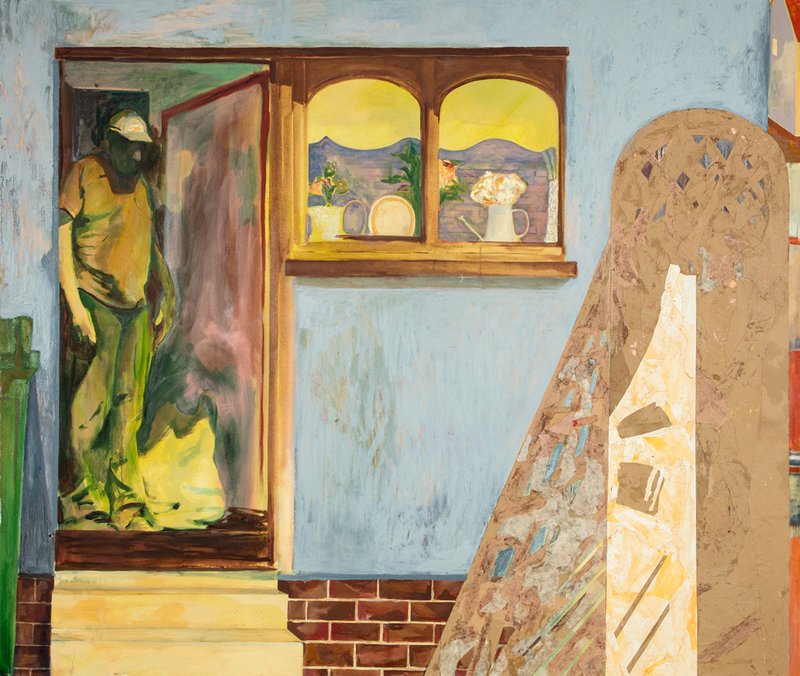 What do you hope to achieve with the show?

That people will go! That would be quite good. It’s very daunting, having a solo show.