Drawing Year alumnus Ben Westley Clarke was awarded the Richard Ford Award in 2018. This prestigious award, supported by the Royal Academy, offers the opportunity for a small group of figurative artists to travel to Madrid, Spain and work from the paintings in Prado Museum. Here he reflects on the three months he spent in Spain and the impact this period of intensive study has had on his practice. 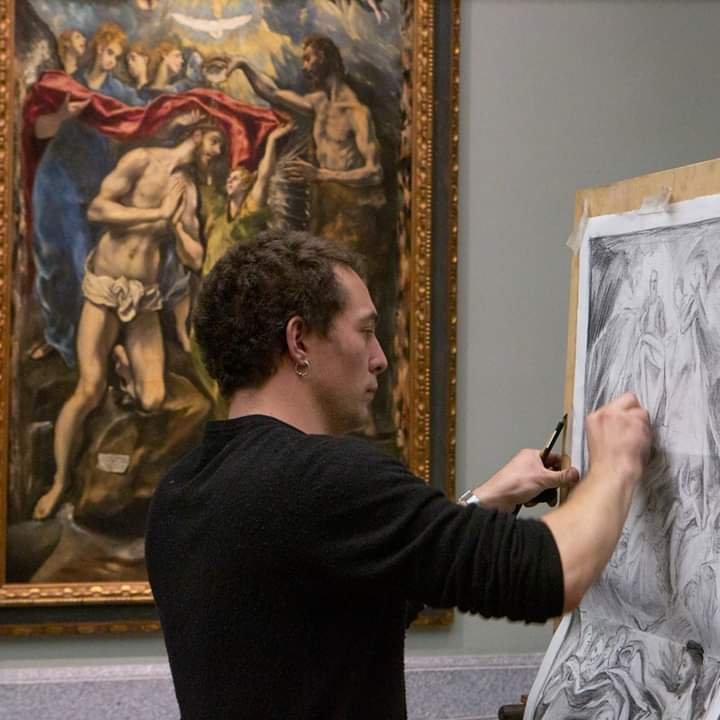 I went to stay in Madrid between September and November 2018, where I had special permission to draw in the Prado Museum. For me it was an incredible, life-changing experience.

I was eager to take advantage of the Prado’s incredible collection and get to know it intimately. When I wasn’t travelling to other sites and galleries, I visited the Prado every day, usually arriving first thing in the morning when the Museum opened. I usually took lunch at about 2pm-3pm. I then stayed until 8pm, with a break for coffee. Most mornings I ran before going to the museum. Most evenings I made food at home. I found I gained so much confidence from being able to work on my art all day, every day.

It is fascinating to see, first hand, how so many of the Old Masters directly influenced each other; how Titian had influenced Tintoretto and Veronese, and how all three had in turn influenced El Greco, Velasquez and Rubens. The relationship between Goya and Velasquez is also captivating- their dialogue, through history, is the basis for much modern painting, from Manet onwards. There is a very dark Titian painting, lit by a single, internal light source, called “The Agony in the Garden”. Much of the chiaroscuro in Zurburan, Velasquez and Jose de Ribera, must have been influenced by paintings like this, via Caravaggio. 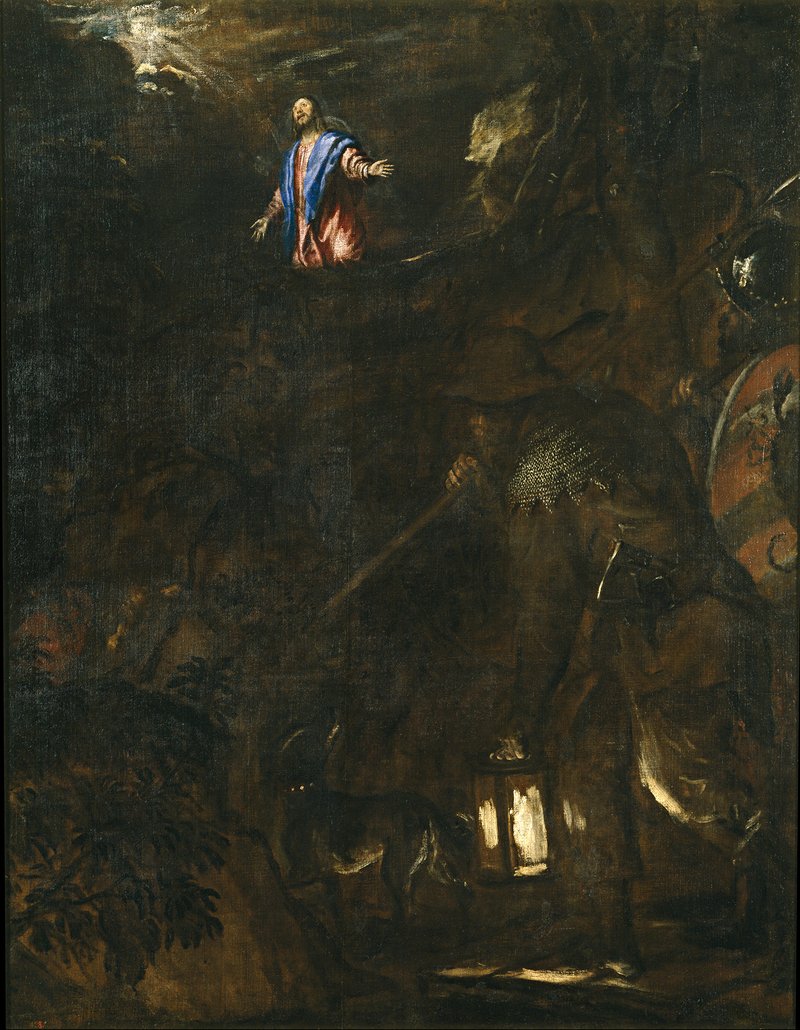 I was able to search online, through the Prado’s archive, and select works on paper to view in the flesh. I looked extensively at Goya’s ink and lithographic crayon drawings, many of which were preparatory works for The Disparates and the Disasters of War series of etchings.  I often asked to view four drawings per morning, and allowed myself an hour to work from each. This experience was as close as possible to receiving a drawing lesson from Goya himself. I observed Goya’s expedient, confident technique, caught between delicacy and brutality, as well as his deft, black humour and skill at juxtaposing illustrated images with words. Sometimes, Goya is a realist, hitting you with harsh, objective facts about violence, war and human survival. At other times, he is a gothic-romantic fantasist, conjuring elegantly designed winged creatures, goblins and zombies. He constantly oscillates between empathy and bitter, hilarious irony. 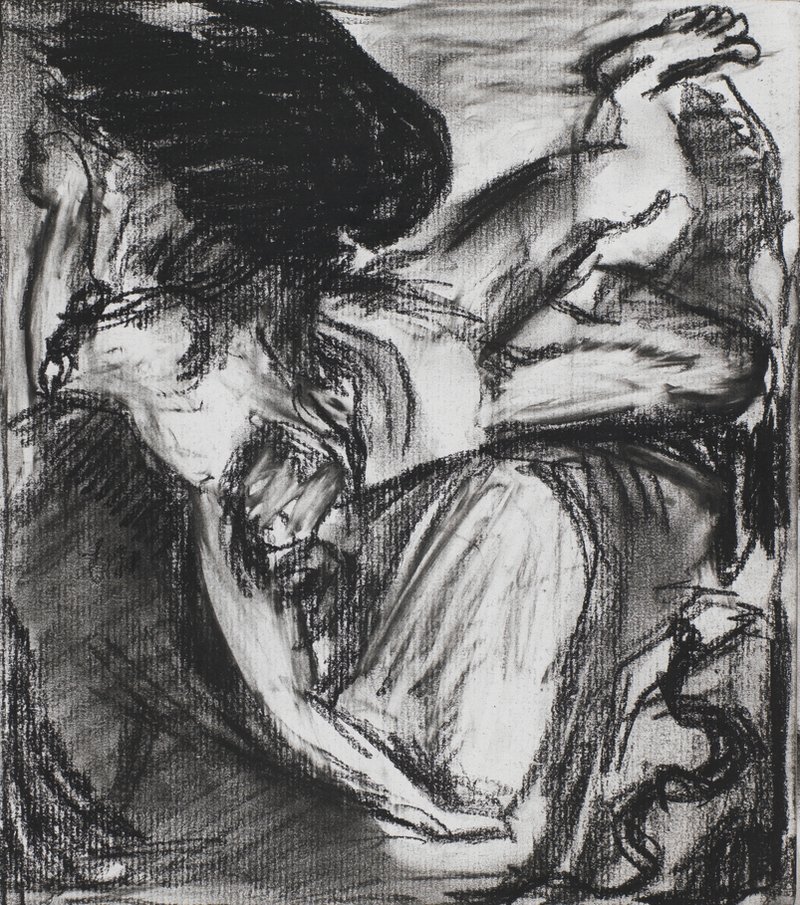 At the beginning of the trip, I drew a lot from Goya. I became particularly interested in the early Tapestry Cartoons, which depict contemporaneous Spanish customs, festivals, games and rituals. I was able to use an easel to make larger, more resolved transcriptions of paintings such as Summer, The Straw Mannequin and The Blind Guitarist. These celebratory, bustling paintings are enormous and must have been pieced together from a huge amount of preparatory work.

I was able to visit the Restoration Department, which was fascinating. I watched the separate panels of an Early Netherlandish Triptych being restored, before they were reunited. I drew from Goya’s painting “the Snowstorm”, whilst it was being restored. Originally, the painting was discarded after being used as a tapestry design, and was folded up – lots of the paint is cracked and missing along these folds. 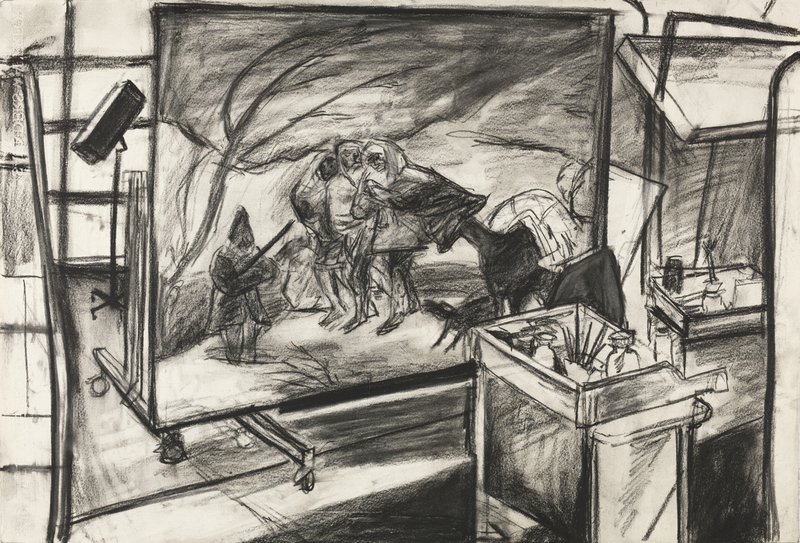 I often made quick drawings around the galleries in rapid succession, before making slower, more concerted, and often larger, drawings. I used a mix of pencils, compressed charcoal, sanguine, black chalk and sepia crayon, on Ingres and Saunders Waterford paper. Towards the end of the trip, I began to look more closely at El Greco. I made large drawings of The Trinity and The Baptism of Christ and visited Toledo, where the artist lived and worked. View and Map of Toledo and The Burial of Count Orgaz, which are housed there, were mind-blowing. I like the unnatural luminosity of El Greco’s paintings– how the figures seem to illuminate the painting with their own light. The early-modern art critic Julius Meier Graefer wrote that ‘All the generations that follow after him live in his realm. There is a greater difference between him and Titian, his master, than between him and Renoir or Cézanne’. Cubism seems premeditated by El Greco.

I visited the Escorial – the Royal Palace of the Spanish Monarchs, just outside of Madrid - and Cuenca – a medieval town about 2 hours east of Madrid by bus. This town was visited and painted by the artist David Bomberg. The town is amazing to draw, with its enormous cliffs, rock faces and dangling ‘casas colgadas’. It also has an interesting, smaller, cathedral and a museum of Abstract Art.

Finally, I visited San Antonio de las Floridas, the church where Goya is buried. Goya painted the ceiling of the church in fresco, right in the middle of his career; the painting has a gracefulness and light akin to Goya’s early work, interrupted by some surprising savage-looking figures and passages of paint.

From the hundreds of drawings I made during the trip, I have found that about one fifth of them are really successful. I’m excited to bring my learning from the trip into my own painting.