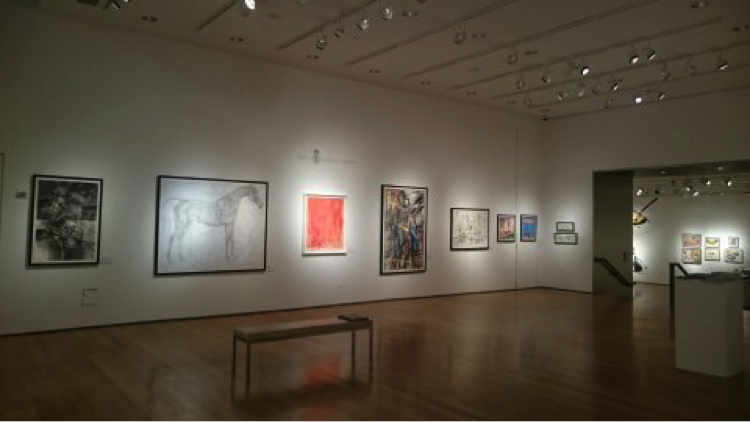 As the culmination of a six-month project, the School’s artists and curators worked against the clock with Christie’s framers and technicians to install the show in just one day. It took a dedicated team of three a whole day to re-stretch artist Charlotte Mann’s giant floor-to-ceiling drawing but the team’s combined efforts resulted in an extensive and impressive exhibition spanning three rooms at Christie’s. 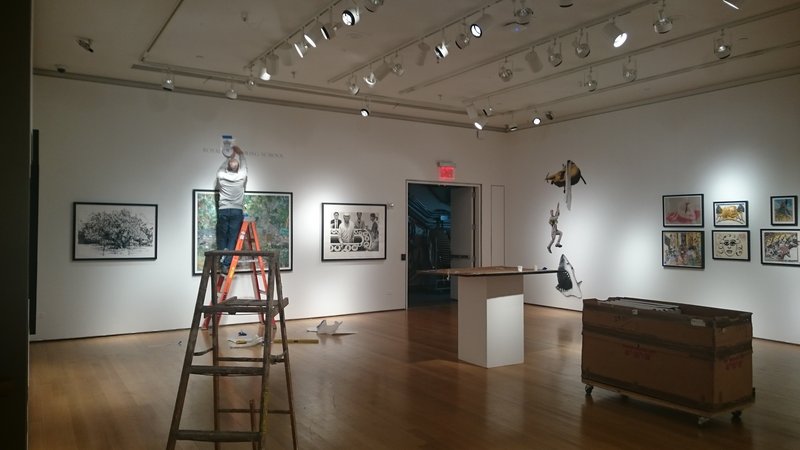 When artistic director Catherine Goodman and co-curator Julia Balchin waded in through thigh-high snow to throw open the doors of the exhibition on Saturday morning they were surprised to find art collectors clad in snow boots who had struggled through the blizzard and were already closely examining the works on display.   The exhibition showcased drawings by over 50 alumni, faculty and artists closely associated with the Royal Drawing School, including Christopher Le Brun President of the Royal Academy, Humphrey Ocean RA, Timothy Hyman RA, and David Dawson, painting assistant and model to the late Lucian Freud until his death in 2011. Portraits by Catherine Goodman and Ishbel Myerscough, both of whom are winners of the National Portrait Gallery’s BP Portrait Award were also exhibited. 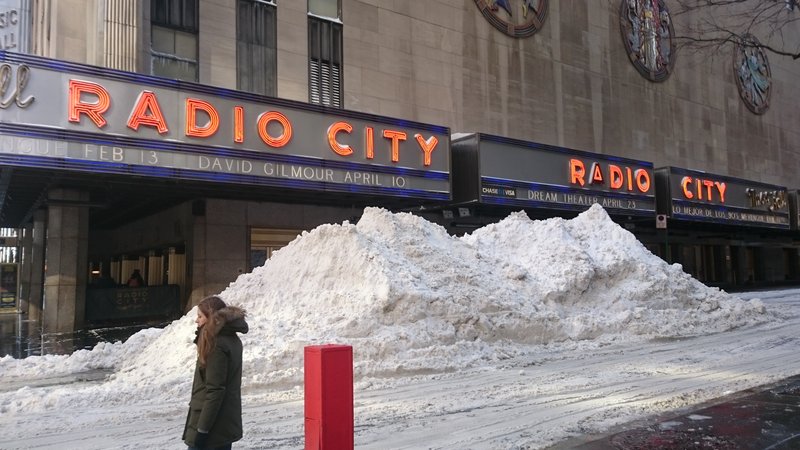 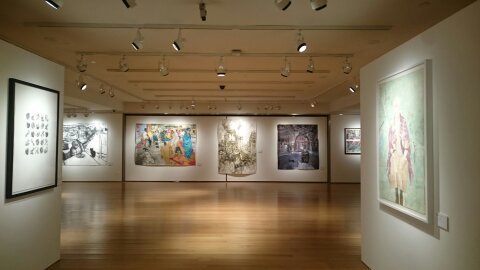 The exhibition revealed an interesting juxtaposition of young emerging artists alongside established artists at the height of their careers, many of whom have taught the younger exhibiting artists, and all of whom will have learnt from the Old Masters. These artists share a commitment to drawing from observation and to the possibilities it offers to their practice across different disciplines. Works by alumni of the Royal Drawing School’s postgraduate programme, The Drawing Year, included a vast and detailed landscape of Central Park Zoo by Laura Footes spanning 10 foot, drawn in biro entirely from memory; an exquisitely drawn near life-size horse by Clara Drummond, after George Stubbs; and a transcription, After Cranach The Younger by Olivia Kemp. 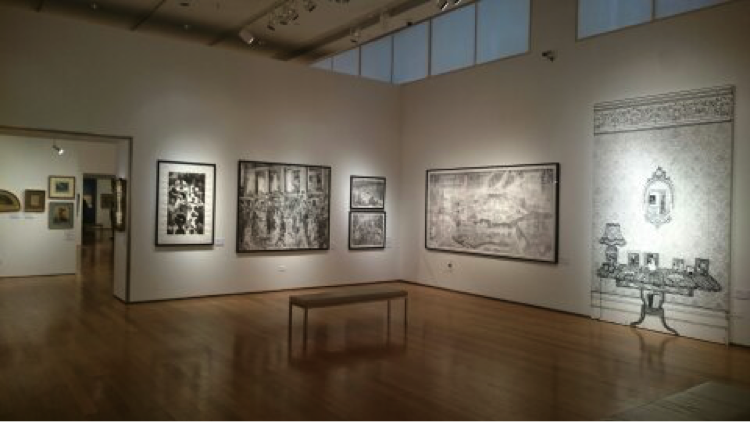 Visitors also had the opportunity to admire a giant drawing in acrylic marker pen of an interior by Charlotte Mann, known for her large 1:1 scale wall drawings and drawn installations, along with a drawn portrait of actor Christopher Lee by alumnus Stuart Pearson Wright, another first prize winner of the BP Portrait Award, who studied on the Royal Drawing School’s postgraduate programme. Wright has been portrait artist to an array of Britain’s acting talent including Sir Ian Mckellen, Jeremy Irons, John Hurt, Johnny Lee Miller, Rosamund Pike and Daniel Radcliffe. 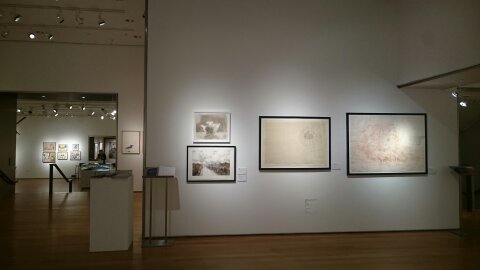 The exhibition preview buzzed with contemporary artists, collectors, and curators and enthusiasm for the show went from strength to strength during the week-long celebration of drawing in New York. With commission from sales going to support the School’s scholarship programmes, everyone was delighted that Drawings from the Royal Drawing School raised the most sales of any of the School’s exhibitions to date.

The Auction of Old Master and British Drawings brought another frisson of excitement to the show, drawing in crowds to bid for works including Rubens’ exquisite drawing after Michelangelo, which sold for just under $2 million, while Maarten van Heemskerck’s The Triumph of Tobias realized the world auction record for a work on paper by the artist.  It was fitting that Drawing Year alumni who have spent many hours studying and drawing from the Old Masters, could revisit many of the seminal works on paper in the exhibition next door. Meanwhile, for many of the Old Master collectors it was reinvigorating to see the work of the young contemporary artists in this context, and provided an exciting opportunity for dialogue on both sides. 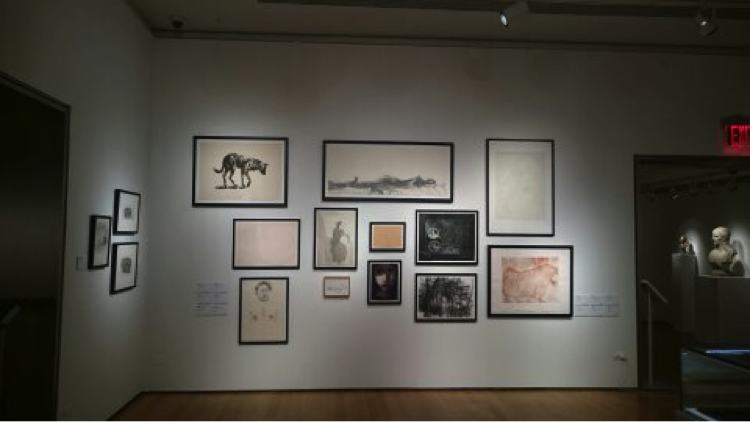 The exhibition in New York extended the Royal Drawing School’s collaboration with Christie’s, but it also underlined the School’s commitment to partnerships with arts institutions in the U.S, including The Yale University School of Art, Rhode Island School of Design, University of California, Los Angeles, and The New York Studio School.  The School’s work in the US involves developing residencies, workshops, scholarships and exchange programmes to benefit both US and UK art students for whom drawing is a part of their professional practice. One of the most recent developments is an educational partnership with the Morgan Library and Museum. With great enthusiasm for the Royal Drawing School’s exhibition at Christie’s New York from The Getty and Princeton, the School looks forward to further collaborations on the horizon. 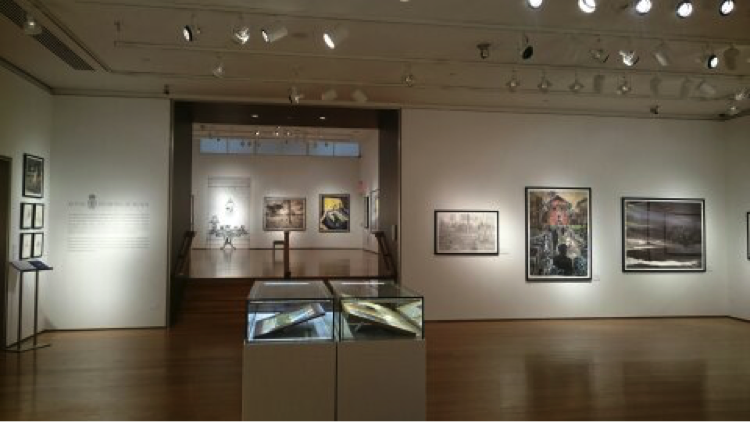