This summer Tom Scotcher (Drawing Year 2017), Katy Papineau (Drawing Year 2019) and Ali Farley (Drawing Year 2020) were selected to compete in Sky Portrait Artist of the Year 2020. The prize is a £10,000 commission to create a portrait of the ballet dancer Carlos Acosta, which will go into the Birmingham Museum & Art Gallery collection. Filmed after the first lockdown but in the midst of pandemic restrictions this summer, the programme highlights the value and richness that the arts bring to our lives. Here Tom, Katy and Ali tell us about their experience... 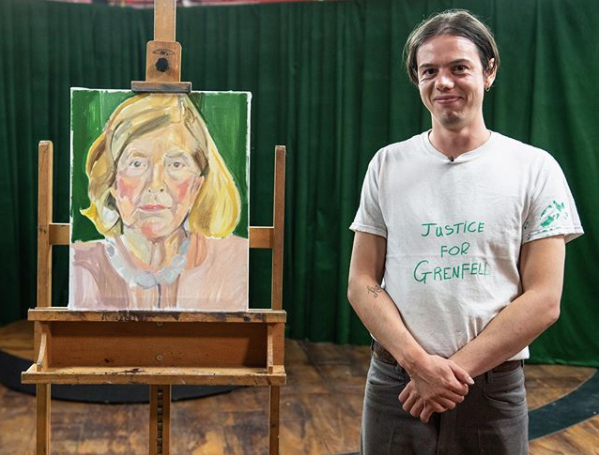 Featured on the first episode, Tom was tasked with painting a portrait of Lady Glenconner along with two other artists. Tom's portrait was eventually selected by Lady Glenconner as the artwork that she would like to take home.

I entered Portrait Artist of the Year because I hoped that I could get some commissions from the publicity! The time constraint of 4 hours wasn't an issue as the portraits of my friends and family I had been painting up to that point had usually taken around the same time. Every half hour or so a film crew would come round and do a short interview. I didn't mind this so much because it gave me the chance to step back for a few minutes and take a breather.

The challenge was that I didn't know who the sitter was until a few minutes before painting, and trying to capture a likeness for someone you've never met was quite a daunting prospect. I was suprised how many of the other artists seemed to rely on using ipads and phones. In a way I can understand why some of them used it because the sitter is about 4-5 metres away and it can be hard to get the details of a face from that distance. But when you're just looking at the screen, the sitter might as well not be there and I wanted to chat to Lady Glenconner.

The whole experience was surreal and then 3 months later it gets more surreal when you see yourself on the tele. I enjoyed being quoted in two national newspapers the morning after.

I'm screenprinting some Justice for Grenfell t-shirts like the one I wore on the show and all the money is going to The Grenfell Foundation. You can donate here 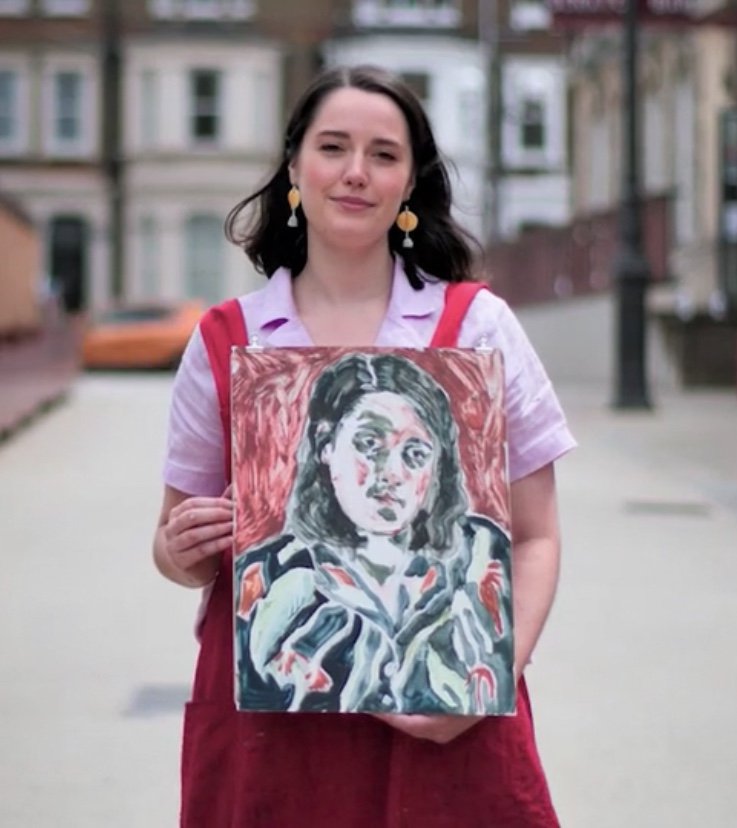 Katy took part in the second round of the competition, painting The Vivienne - winner of the first series of Ru Paul's Drag Race UK.

I entered Portrait Artist of the Year quite soon after finishing The Drawing Year. I was applying for lots of things at the time and applied partly because it was free and simple to apply - I just had to submit an image of a self-portrait. I've also watched the show for years and I've always really enjoyed it. I applied with a monoprint self-portrait that I had done using one of the little mirrors in the Drawing School print room a few months before.

The heat I took part in was filmed in July. Although it was slightly overwhelming, I was mainly just overexcited and happy about getting to be around people, after what felt like ages of barely leaving my flat. Painting to a time limit while being filmed was harder than I expected, mainly because of the regular interruptions to do interviews or take photographs, and I did get quite worried about finishing on time. 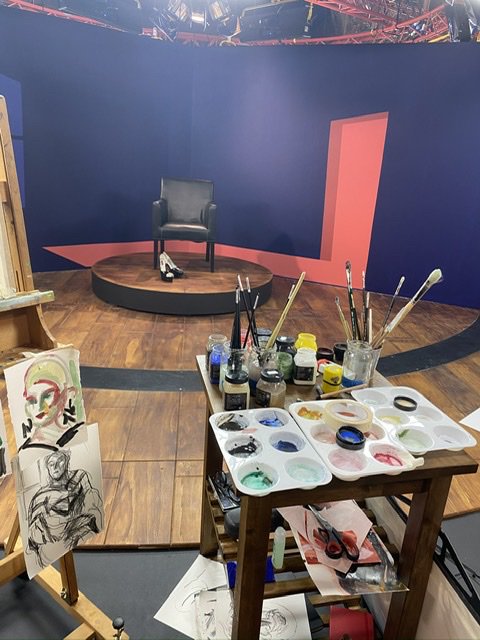 It was a lovely experience overall, and with everything going on, I didn't have much brain space to get too nervous on the day. I also think because only one person out of nine continues on to the next round there isn't a competitive atmosphere, which I would have found much more stressful. I found that practising painting portraits in the run-up to filming had an interesting effect on the other work I was doing, and it was helpful to have something specific to work towards during lockdown. 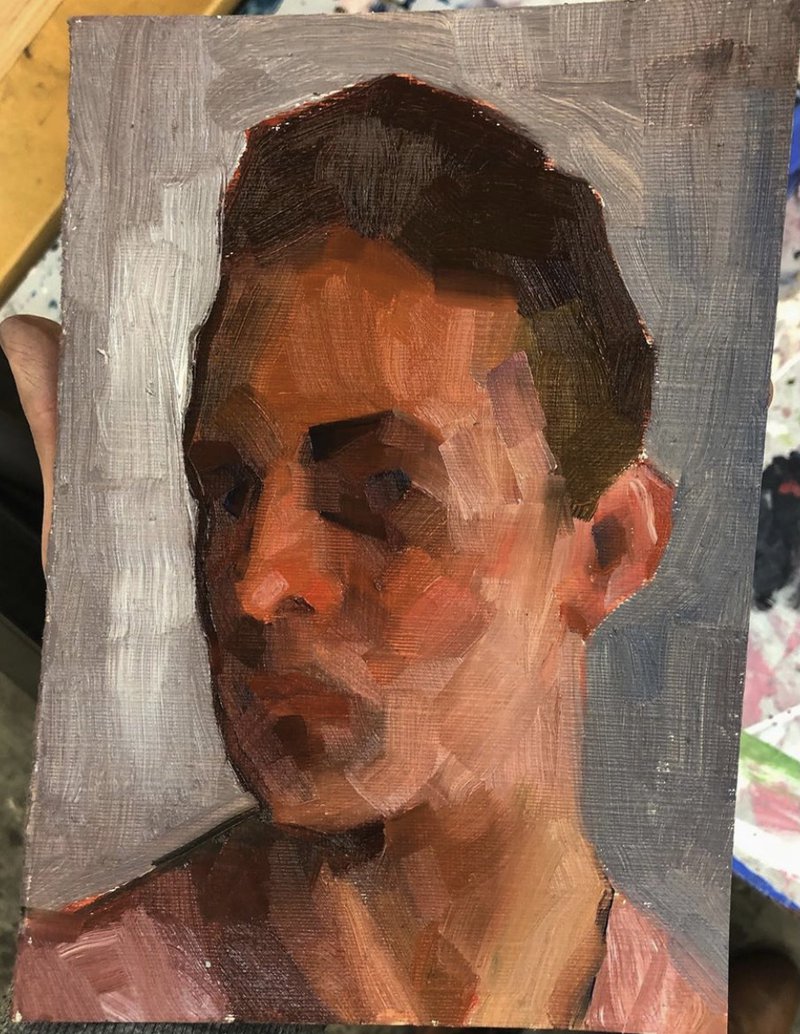 After putting it off for the past few years I finally took the plunge this year and applied for Sky Portrait Artist of the Year, and I’m so glad that I did. It was a somewhat surreal experience being on the other side of the camera on programme that I have been watching for the past few years! Getting to meet the judges and talking with the other artists was well worth the stress of painting a portrait under timed conditions, something I have never done in the past. In fact, painting is usually quite an individualistic and private activity for me, so doing it out of the studio and in front of cameras was quite daunting at first, but the pressure of the competition and my general competitiveness soon got me over this. There is definitely a small part of me that is dreading having to watch myself on the programme, but overall I am so happy that I took part in one of my favourite shows and got to meet such lovely people.

Ali's episode is airing in the coming weeks.

Watch Portrait Artist of the Year on Sky Arts, Wednesdays at 8pm