Situated on the north bank of the Thames, directly opposite the O2 Arena in London’s Docklands, Trinity Buoy Wharf is home to the Royal Drawing School’s Foundation Year campus. With London’s iconic skyline forming a backdrop, and a colourful combination of reused shipping containers and Victorian architecture, Trinity Buoy Wharf is a unique place to study art.

The area boasts a thriving community of over 500 creative professionals and artists largely thanks to a large-scale regeneration project led by Eric Reynolds, Founding Director of Urban Space Management. This October, as we celebrate the opening of a spacious new Clore Drawing Studio in the former oil-storehouse known as The Electrician’s Shop, renovated with support from The Clore Duffield Foundation and Trinity Buoy Wharf Trust, it seems a good time to take a look back in time and uncover the intriguing history of Trinity Buoy Wharf….

The School’s neighbours now include the English National Opera, the Big Draw, and independent fine artists, musicians, fashion designers and photographers but Trinity Buoy Wharf wasn’t always a hub of artistic activity. In 1996 Eric Reynolds and his team set about transforming what had become an empty derelict site into an innovative environment and creative community where nautical history and contemporary innovation meet.  In fact, the story goes right back to Henry VIII.

In 1514 the King granted a charter to the Corporation of Trinity House –  a voluntary association of shipmen and mariners – and it became responsible for erecting and maintaining beacons, lighthouses, lightships and buoys for sea navigation; work which continues to this day. The first wooden buoys and sea marks were made and stored at Trinity House, and later, the iron buoys were tested and repaired at the riverside workshop. Some of these still remain in the area as markers of the nautical past. 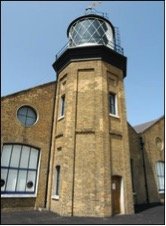 Many new buildings were constructed during the Victorian period, and a number still survive of which the earliest, the Electrician's Building, was built in 1836. It was designed by the Chief Engineer of Trinity House, James Walker, originally for the storage of oil. He rebuilt the remainder of the river wall, and the first of two lighthouses. The iconic ‘Experimental Lighthouse’, which still stands today and claims the title of London's only remaining Lighthouse, was built by James Douglass in 1864 and remained in constant use to test maritime lighting equipment and train lighthouse keepers.  The roof space adjoining the present lighthouse accommodated a workshop for the scientist Michael Faraday, best known for his discovery of electromagnetic induction. He also worked on improvements for lighthouses over a period of thirty years, and ‘Faraday’s Hut’, which is adjacent to the lighthouse, can be visited for a recreated experience of his nineteenth-century work place.

Students at the Royal Drawing School join an illustrious line of creative minds who found inspiration and social and historical interest on the Wharf. The Victorian novelist Charles Dickens was compelled by the plight of the working men who braved all weather conditions working on ‘light-ships’. In his article ‘Floating Sentinels’, published in 1852, he acclaims the ‘grand floating sentinels of the British Channel’ as ‘the great protection against shipwreck along our perilous coast’.  Living ‘under such tempestuous circumstances’ and ‘cut off from all the rest of the word’, Dickens describes how the long hours on board engendered a turn to creative activity. It seems that the Foundation Year art students were not the first to exhibit on these shores:

This has brought to light many an original genius (of a sort), and some have had a sudden fancy that they could paint a portrait, or a shipwreck, or a church, with a sailor and his lass going to be married…

Occasionally the heterogeneous collection of these works of art and utility […] forms an exhibition of an amusing, and yet more interesting kind, as the product of those honest active minds, and huge mahogany hands.

In 1869, Trinity House set up an engineering establishment to repair and test the new iron buoys then coming into use. By 1910 Trinity Buoy Wharf employed some 150 engineers, platers, riveters, pattern makers, blacksmith, tinsmiths, carpenters, painters, chain testers and labourers in the local area. It remained responsible for supplying and maintaining navigation buoys and lightships between Southwold in Suffolk and Dungeness in Kent up until 1988. Almost a decade later, with Reynolds at its helm, Urban Space Management won a competition to develop the historic but derelict Trinity Buoy Wharf into a centre for the arts and creative industries. Reynolds has been a towering figure in urban regeneration since the early 1970s. His other projects include setting up Camden Lock Market, and bringing new life to Spitalfields Old Fruit and Vegetable Market, and Greenwich Market. 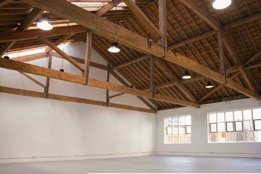 Building on the success of the Foundation Year over the last four years, facilities at Trinity Buoy Wharf have expanded to include the Clipper House Studio, recycled from the former 2012 Olympic Broadcasting Studios at Stratford Olympic Park, with south-facing views over the river Thames, a photography darkroom, and Apple Mac computer suite. With the recent addition of the Clore Drawing Studio, the Foundation Year can look forward to making the most of this large multi-purpose studio for drawing workshops and also for group discussions, lectures, portfolio preparation and events. The new studio will allow the Foundation Year to develop its drawing curriculum for the 45 students on the Programme for whom drawing from observation forms a crucial part of their weekly timetable over the year.

Outside view of the Clore Drawing Studio, formerly The Electrician’s Shop;

The Clore Duffield Studio is an example of Urban Space Management’s sensitive regeneration of the Trinity Buoy Wharf area, which in the past 19 years has become a thriving centre for 500 individuals from the arts and creative industries. The terms of the lease to USM by the Trinity Buoy Wharf Trust state that 25% of the Wharf’s income is to go towards promoting arts activities in the area. This has included tenancy by the Royal Drawing School, the English National Opera, University of East London, and exhibitions and events such as The London Festival of Architecture.

As the Creative Industries leap to the forefront as the fastest growing sector of the UK economy, it seems like the right moment for a site of Victorian industry to pass into the hands of a new generation of artists and innovators…