Johnny Dewe Mathews was born in 1946. He qualified as an architect in 1970 and practised for 2 years in London, New York and Oaxaca. Johnny then worked as a portrait photographer in Mexico from 1973 to 1976, with a one-man show of his photos at the National Portrait Gallery in 1975. In 1977 he abandoned photography and started drawing groups of figures in movement, assembling the drawings together into pictures. He has continued as a draughtsman/painter ever since, exhibiting in London, Paris New York and Los Angeles. He is principally interested in working in environments where people are working together towards creating a common end product. Particularly chefs in kitchens, musicians in orchestras and crews on film sets. This subject matter allows him to explore the visual forms that come about from studying interacting figures in motion.

Through drawing and watercolouring people working together, I look for an essence of what they are doing individually and as a collective group. Much of this requires standing and moving around the subject matter, understanding its 3D form. I then try to assemble them into pictures that somehow express the unity of their common endeavour. Through constant drawing I am at the same time looking for a visual language that I can call my own. 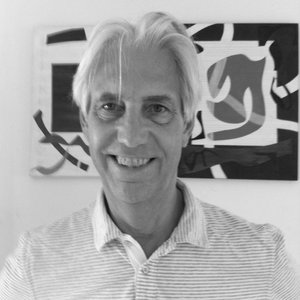