Sophie Herxheimer is an artist and poet. She’s held residencies for London International Festival of Theatre, Southbank Centre, The National Maritime Museum and Transport for London. Exhibitions include The Whitworth, The Poetry Library and The National Portrait Gallery. She has illustrated five fairy tale collections, made several artists’ books, created a 300 metre tablecloth to run the length of Southwark Bridge, featuring food stories drawn from a thousand Londoners; narrated an episode of BBC Radio 4’s Food Programme from her Pie Days project in Margate, made a life size concrete poem in the shape of Mrs Beeton sited next to her grave; and a pie big enough for seven drama students to jump out of singing, on the lawn of an old peoples’ home. Her poems have appeared in Long Poem Magazine, Poems in Which, Tears in the Fence, among others. She won first prize in the recent inaugural Poetry Book Fair Competition. Recent publications include The Listening Forest, The New Concrete, VOYAGE. Sophie teaches and collaborates extensively. 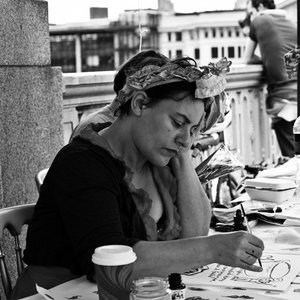