Drawing and teaching in the Caribbean: Artist Residency in Antigua

At the end of 2021, two Royal Drawing School artists, Cherry Pickles and Oliver Macdonald Oulds spent three months in Antigua. Supported by the Halo Foundation and the Jumby Bay Fund, working with the Antiguan Ministry of Education, they developed a training programme for the art teachers of Antigua and Barbuda, and worked on their personal art practice. Here, they tell us about their experience... 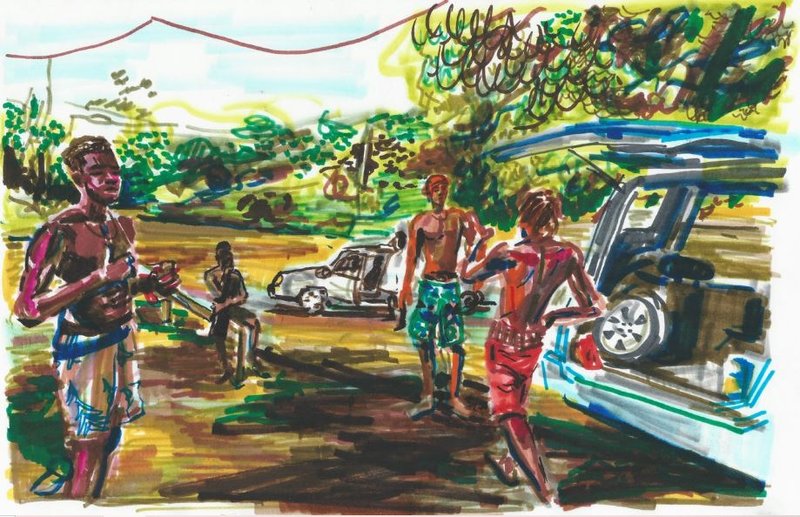 Antiguan education charity, The Halo Foundation, recently identified a need to develop visual arts education in schools across Antigua. They invited The Royal Drawing School to help them create and deliver an arts programme - to teach the teachers - with a focus on drawing from observation.

Artists Cherry Pickles (Senior Royal Drawing School Faculty), and Oliver MacDonald Oulds (Drawing Year 2018 Alumni and Young Artists Faculty), were keen to take on the challenge. Alongside Mr Anson J Henry from the Antiguan Ministry of Education, they were tasked with tailoring drawing workshops for 23 Antiguan art teachers of differing levels, from public and private schools across the country. The aim of the project was ambitious; increasing confidence and abilities in teachers, who could take new skills back to the classroom and develop their students’ art education, increasing Antiguan art identity and inspiring a new generation of artists. 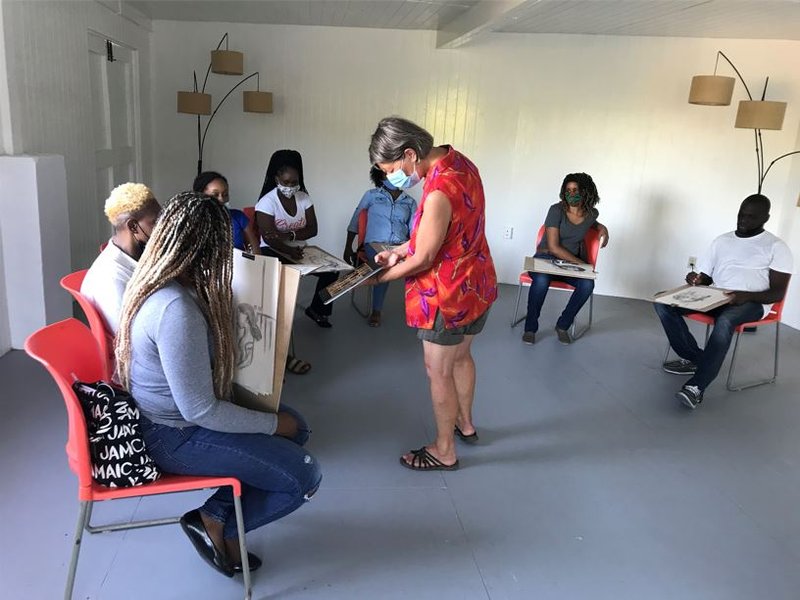 Despite some initial delays due to Antigua's Covid restrictions, the teaching started on a very positive note. "The students were divided into three groups to keep the class numbers low," Cherry said. "This meant that the lesson was repeated with each group, so there was plenty of one-to-one tuition. Everyone took part in group discussions both about their own work and the images we included from art history/ contemporary art. Each week's lessons were themed, e.g. Self-portraits, Landscape with Figures, Full-length Portraits, Collage etc. As we couldn't have models, we improvised with students drawing each other, visitors and ourselves - which worked very well." 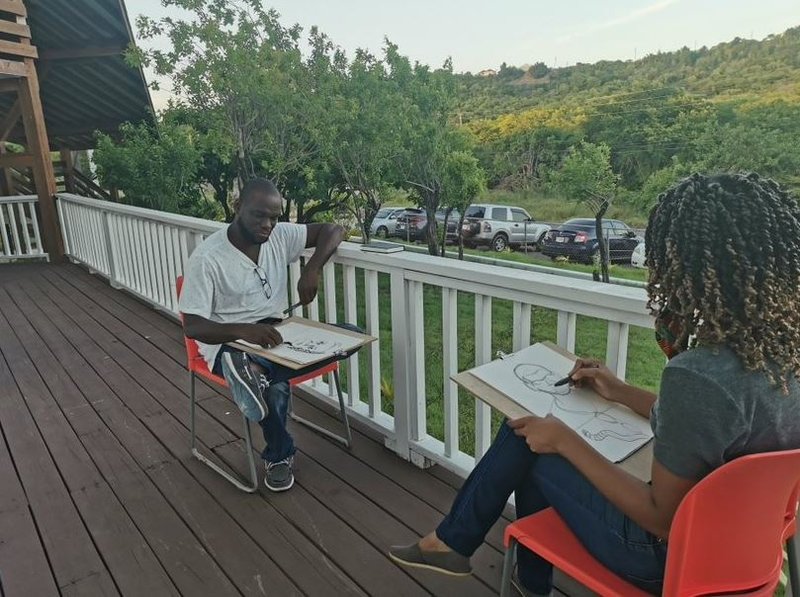 Oliver told us, "the teaching sessions were the best I’ve ever been part of. They were received with such gusto and buzz, that it was easy to feed off the energy. My favourite part of each lesson was during the art references we would show at the half-way mark. Religion is an important part of island life, and it added a layer to the pre-renaissance imagery that I hadn’t been able to see before. It was common for the teachers to know a lot more about the religious scenes depicted than we did. This made the discussions really come alive.

Mr Anson J Henry was our local counterpoint for the teaching sessions. He's an artist based in the capital St Johns and was excellent help during the lessons, especially with livening up the atmosphere and breaking down certain principles into more localised explanations. He was also a generous tour guide and became a great friend." 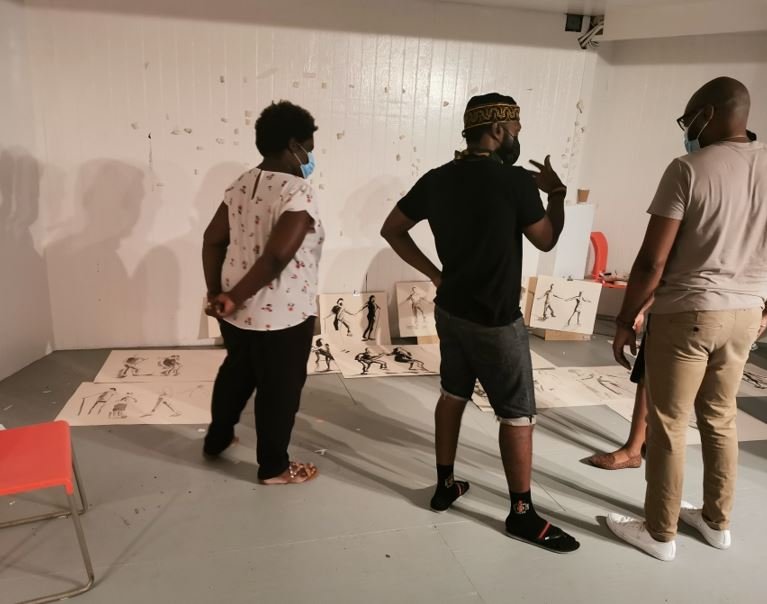 "I was proud of the work we accomplished and wished it could have lasted a while longer, to build on the foundations our teaching had laid down. There was no shortage of talent amongst the teachers, and they loved discussing art history. Having access to our museums and galleries in the UK is something that we take for granted as a powerful tool working as artists and teachers." 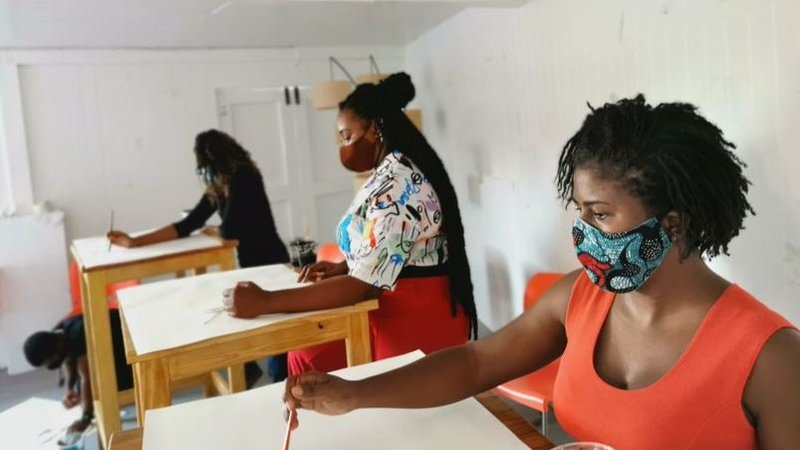 "Through making a lot of contacts we were able to arrange an exhibition of the students' work in G-Gallery. They invited family and friends, and local artists and other interested people came too. This was a big success for the students and the venue, and it felt like a real culmination of their progress," Cherry said. 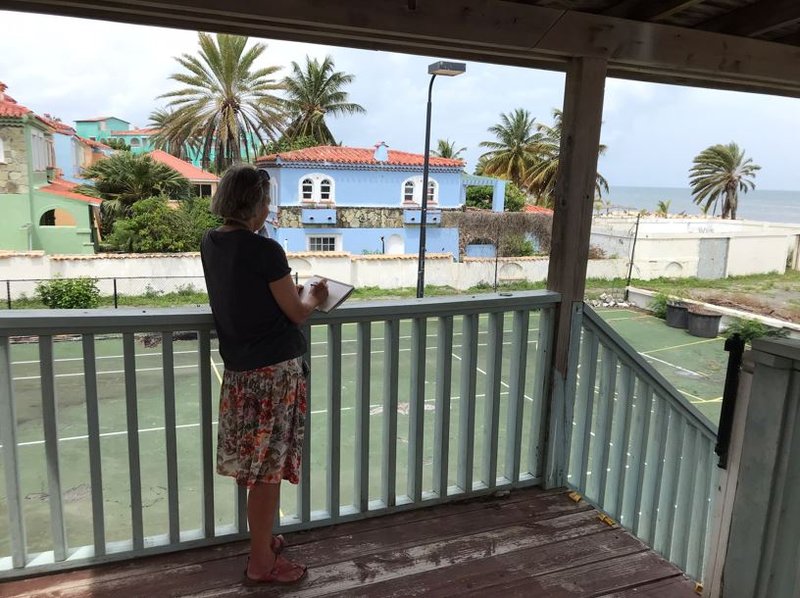 Cherry drawing from the balcony of the apartment.

"The landscape was tremendously varied for a small island. It looked mountainous, but there is also a rainforest. There are people in the capital St Johns who never go to Falmouth in the south, and vice versa. They have completely different atmospheres. Lots of people told us the stories of how they got there. I met a horse who had come from Wales by boat! I felt that when I was there I had almost too much subject matter, but I have realised since that I can't put everything in a drawing, only hints and clues," Cherry told us. 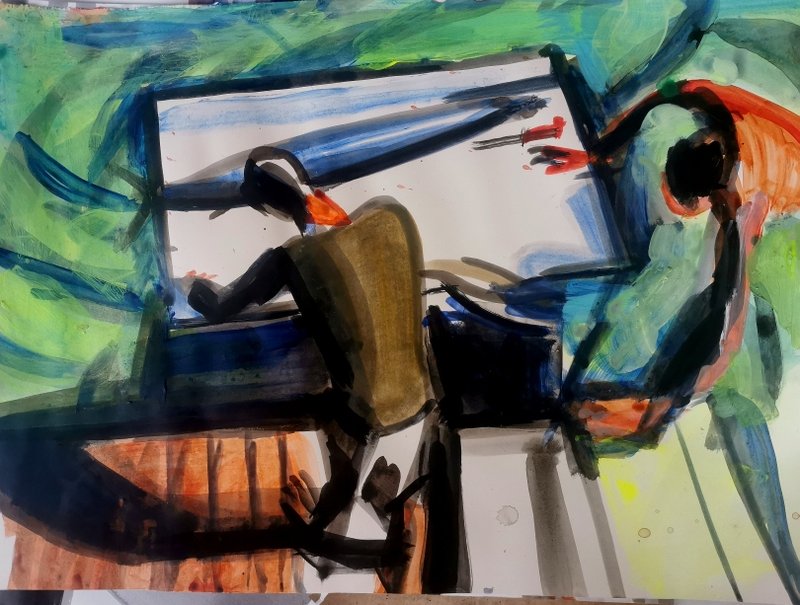 In terms of self-directed practice, Oliver told us, "I tended to work from the balcony at the flat or I would draw on location when Cherry and I would go out exploring in the car. As I got to know the local area more in the second and third month, I would walk around and try to meet people and see if they would sit for a portrait. This would lead to meeting yet more people as locals recommended other friends to draw. It became commonplace for somebody to recognise me and shout out “ARRRTISSSST” from their car. People seemed to be genuinely stoked at having their portrait drawn, and often I would do a second version on my iPad, which meant they could have a digital copy of the artwork to avoid any awkwardness and expectation of keeping the paper original." 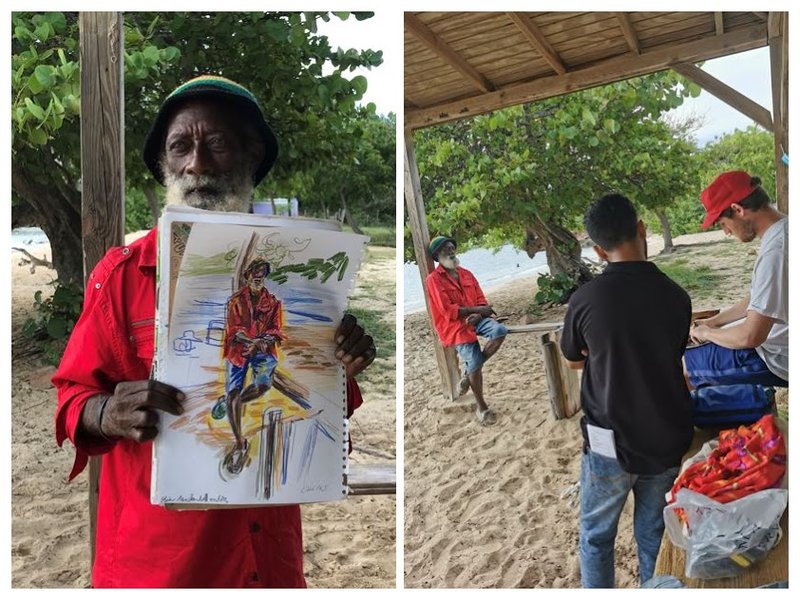 "Towards the end of the residency, I felt like I had more of an understanding of the relationship dynamics between the holiday tourism and the local workforce. One requires the other, but not everyone is happy about it. I got friendly with several locals that would sell fruit and veg on the corner of Cobbs Cross, a road near to where we stayed. I would go down there to draw and hang out. A lot of the crew were looking for jobs on the boats or at the hotels, but Covid was making it tricky due to a lack of uptake in the vaccine." 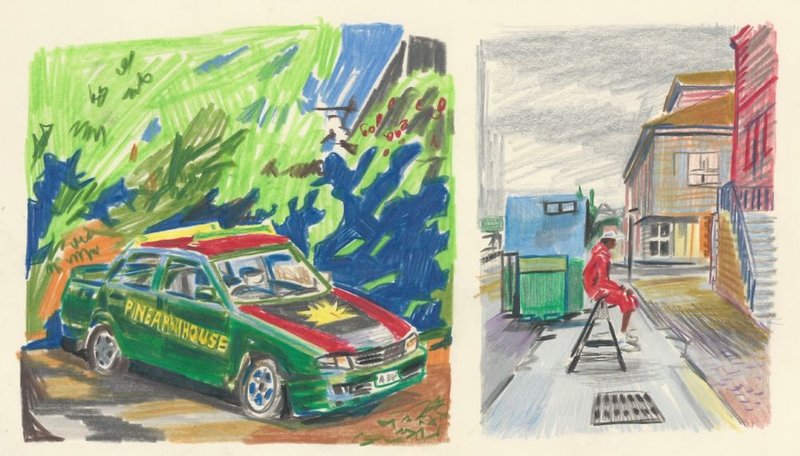 "One of my favourite memories of my time there was sitting on the dock in Falmouth Harbour, with Carlos and G-man fishing, passing away the hours on a Sunday in the off-season. I would be drawing, there would be music playing and an optimism in the air that a fish would take the bait any moment now. This became a routine for a few weeks, until the harbour started getting too busy with super yachts and tourists." 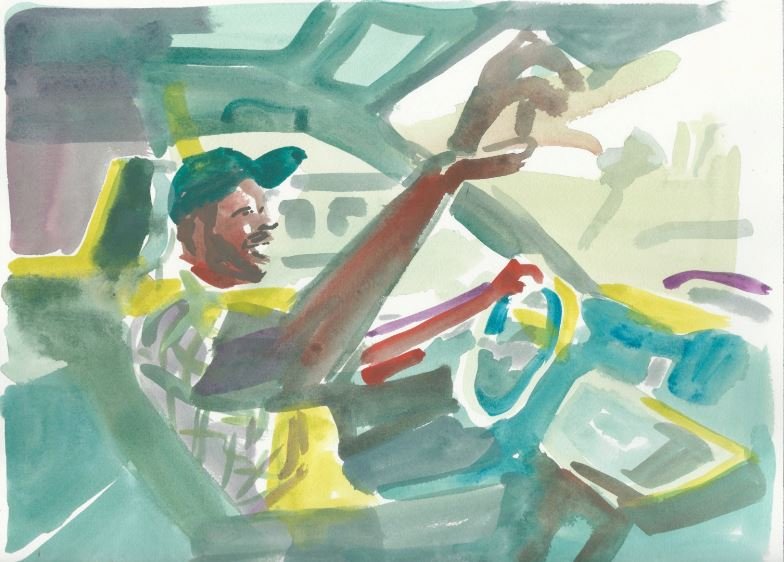 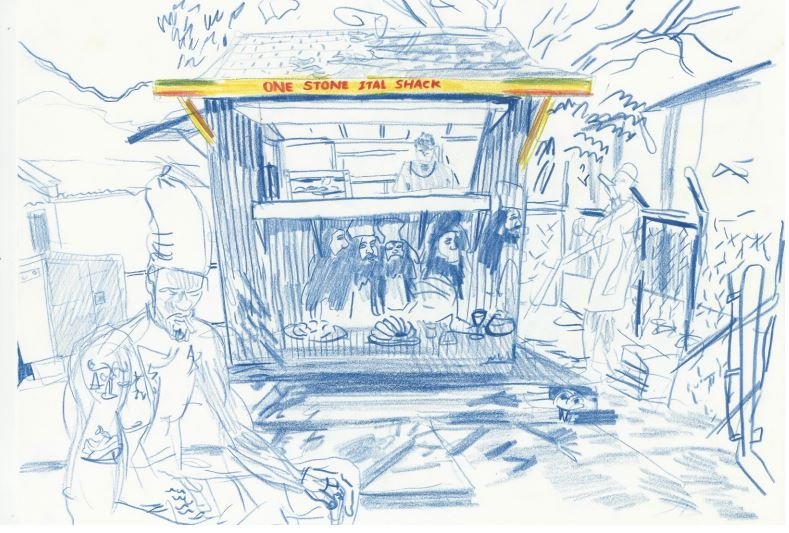 The Antigua Teaching Residency 2021 was generously supported by a grant from the Jumby Bay Fund and the Halo Foundation, Antigua and Barbuda.

Find out about our other artist residency opportunities.