Royal Drawing School alumni Rachel Mercer and Qiong Wu spent 7 weeks in the city of Chengdu in Sichuan Province, China. This funded residency (which included a stipend for an extra four weeks of  travel) was awarded by the Royal Drawing School in collaboration with Elm Education (China) and San Mei Gallery (London, UK). They worked on their own practices and provided painting workshops to Chinese students of various ages and abilities. With the help of Elm Education Rachel and Qiong put on an exhibition in Chengdu which was attended by the students and friends. Here, Rachel reflects on the residency, the paintings she made, and how her experience continues to influence her practice. 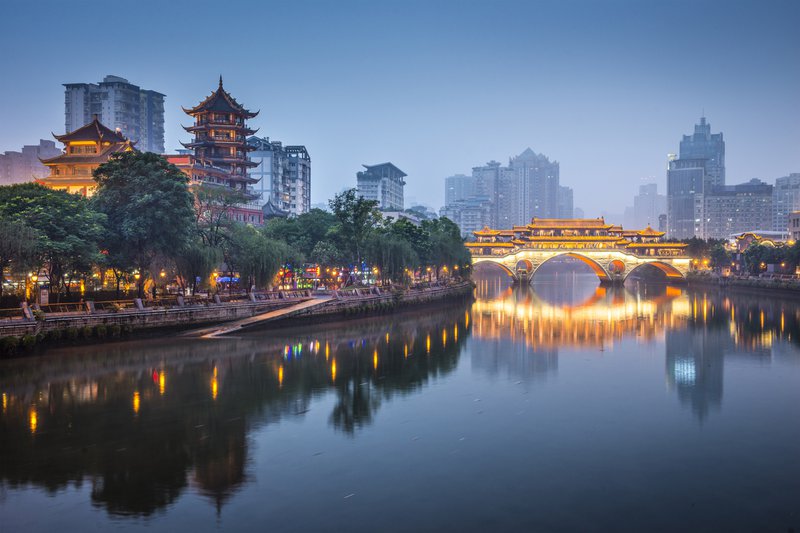 At first, Chengdu struck me as one huge grid of roads, fly-overs and traffic lights, shopping malls and billboards. Clusters of generic tower blocks repeated across the skyline, interspersed with cranes gathering over construction sites. Tucked behind some street furniture and hiding under a baseball cap, my pencil darted across the page after my eye, trying to keep up. My focus was shifting rapidly, struggling to settle on any one form. I tried to find a visual route from the pavement where I stood, to the busy road, to the piles of bicycles adjacent and the municipal workers dressed in orange napping under a ginkgo tree, and the 6 story building behind. It was no use, I couldn’t seem to engage with what I was looking at, or even hold a thought. 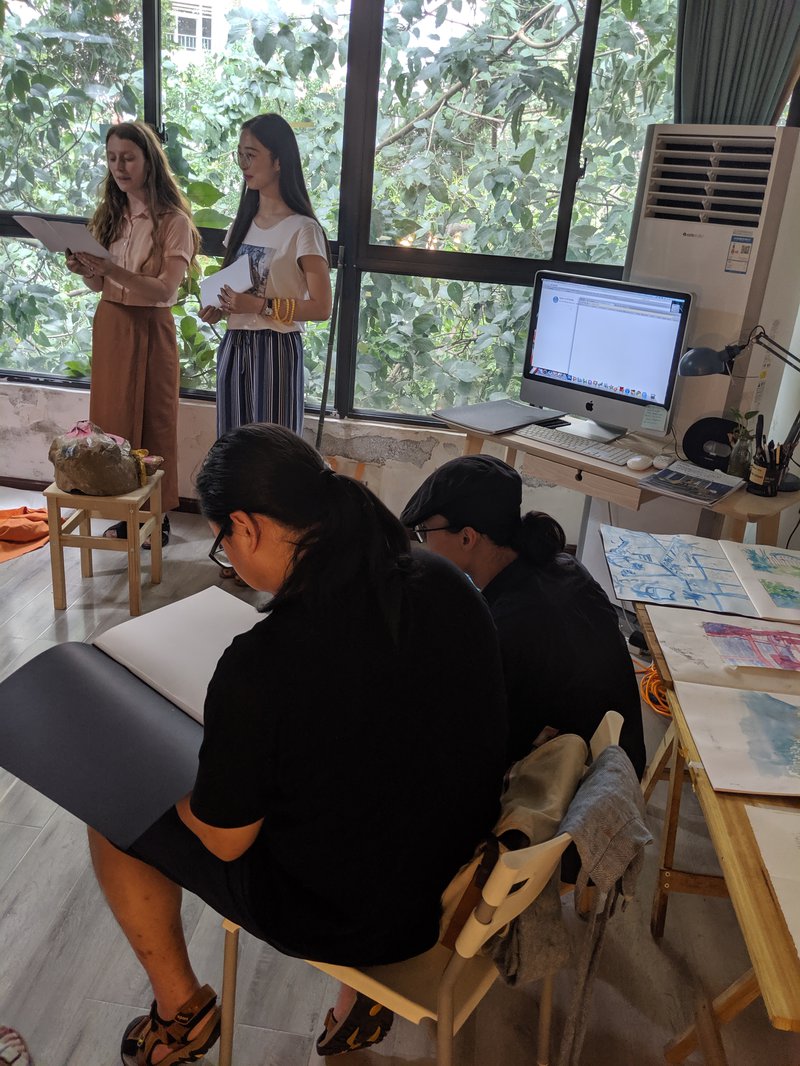 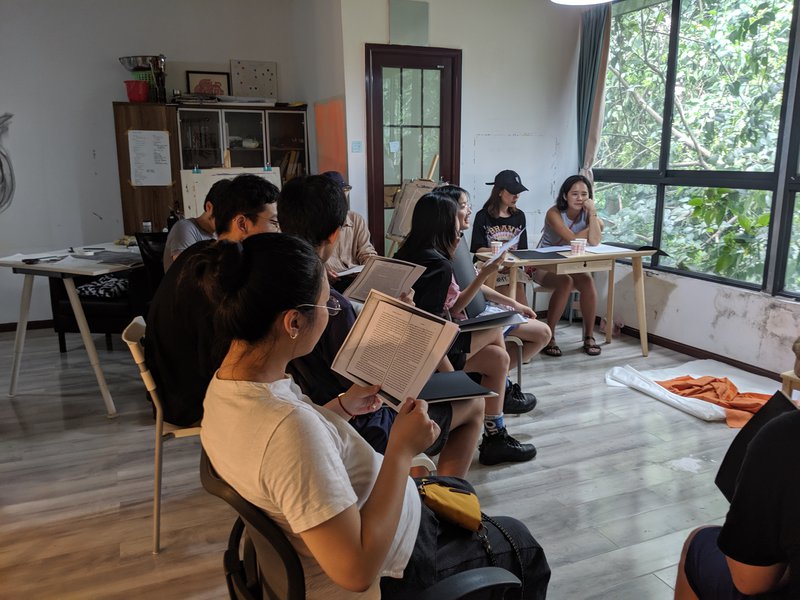 In the streets around the apartment I would see municipal cleaners, each wearing the standard issue wide-brimmed straw hat, busying themselves with brooms made of bound bamboo. These government workers are nearly always very old, with sun-scorched skin and deep wrinkles from a long life of work. By noon they would be seeking the shade to escape the 34 degree heat. I quickly sketched their bodies while in repose. Their forms were made lumpy by their stiff orange suits. As they squatted, I also drew their sinewy ankles and gnarled feet. I was starting to find a foothold. 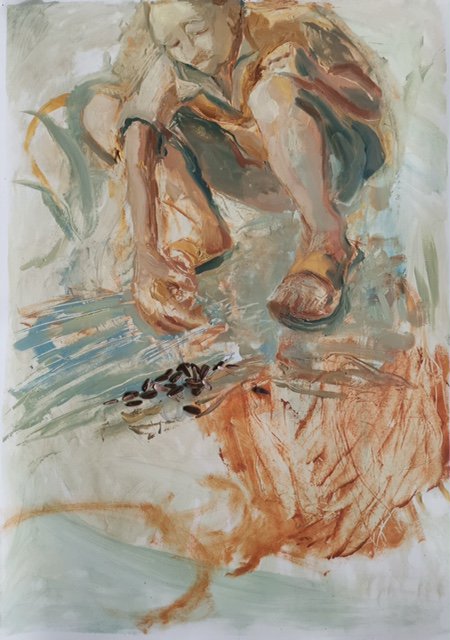 I drew a street seller who crouched in a shady spot, arms hanging from his knees. My pencil was at last synchronised with my eyes as they moved across his brow and into every wrinkle on his forehead. His hands moved slowly and with purpose to arrange the woven fans he was selling. The way his body hunched, his form and the way he balanced seemed to move me, but I could not quite say why. At least I could grab just these small glimpses of city life in China, despite feeling that I couldn’t yet articulate myself.

Whenever I drew outside I drew quickly, aware that my subject might move or that my view from my discreet vantage point would be obscured by crowds of pedestrians or (most likely) I would be discovered with someone by a smartphone or camera lens. Often people would stop and ask me if I speak Chinese. On one occasion I was interrupted by a man who called himself Benjamin and asked me where I was from and why I was drawing. Benjamin worked for a government think tank and was also a scholar in political philosophy. We stayed in contact, often discussing the ways in which Taoism and Confucianism relate to modern politics and society. With each new friendship forged this new and forbidding place seemed to open itself, gaining personality and drawing me into deeper understandings. 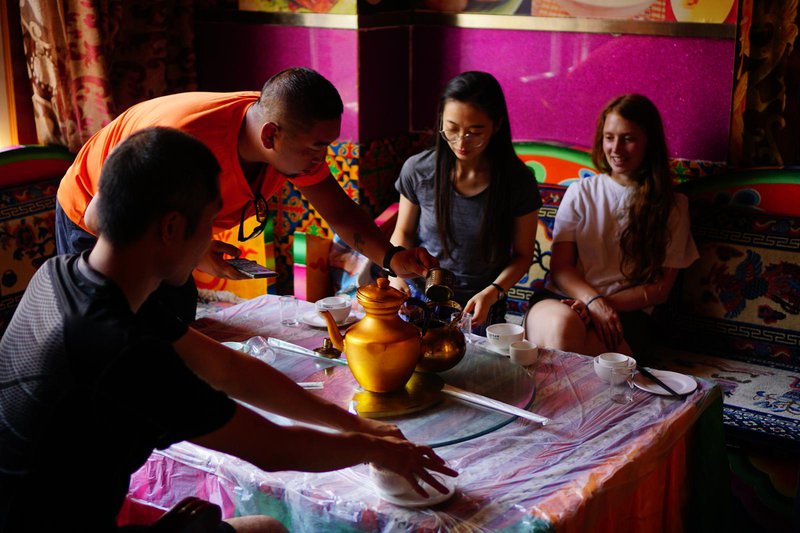 I started the residency feeling like a tourist, wide eyed and able only to make superficial cultural comparisons. This developed into the feeling of being lost and confused by the unfamiliar surrounds and for reasons that I could not quite pin down I felt awkward and uncomfortable. I think part of making work in the studio was about trying to unpack the reason for these uncomfortable feelings.

In London I’ve found a way to avoid shopping centres, supermarkets, big roads and busy tourist attractions but in China I was asked to confront the aspects of modern life that make me uncomfortable. In part, my feelings came from grappling with the juxtaposition between the China of my imagination and the unforeseen reality of what felt like such an industrious, energetic and unfamiliar country. 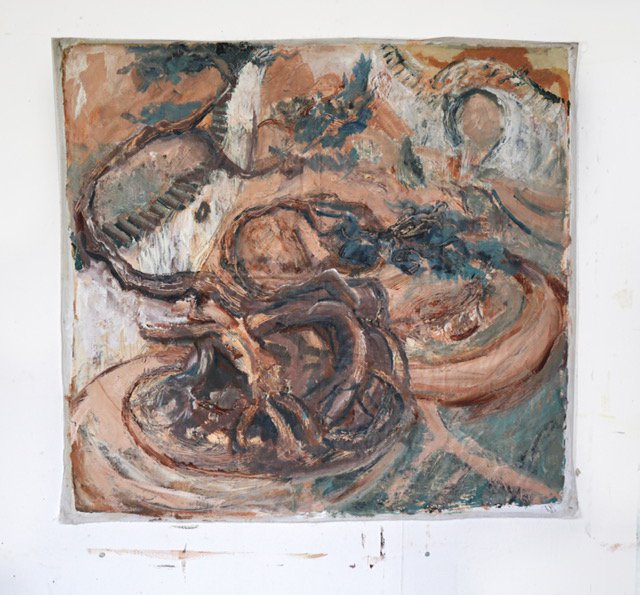 Therefore, I went in search of true feelings, to study relationships. These bonds between people follow age old patterns, yet they still tell much about contemporary life. In China it is very common to see infants being cared for by their grandparents; I would watch them picking the children up from school, or carrying babies, fanning them vigorously on street corners. 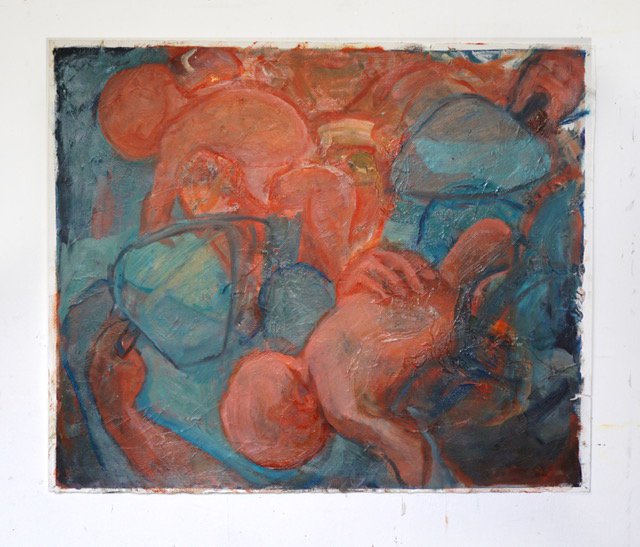 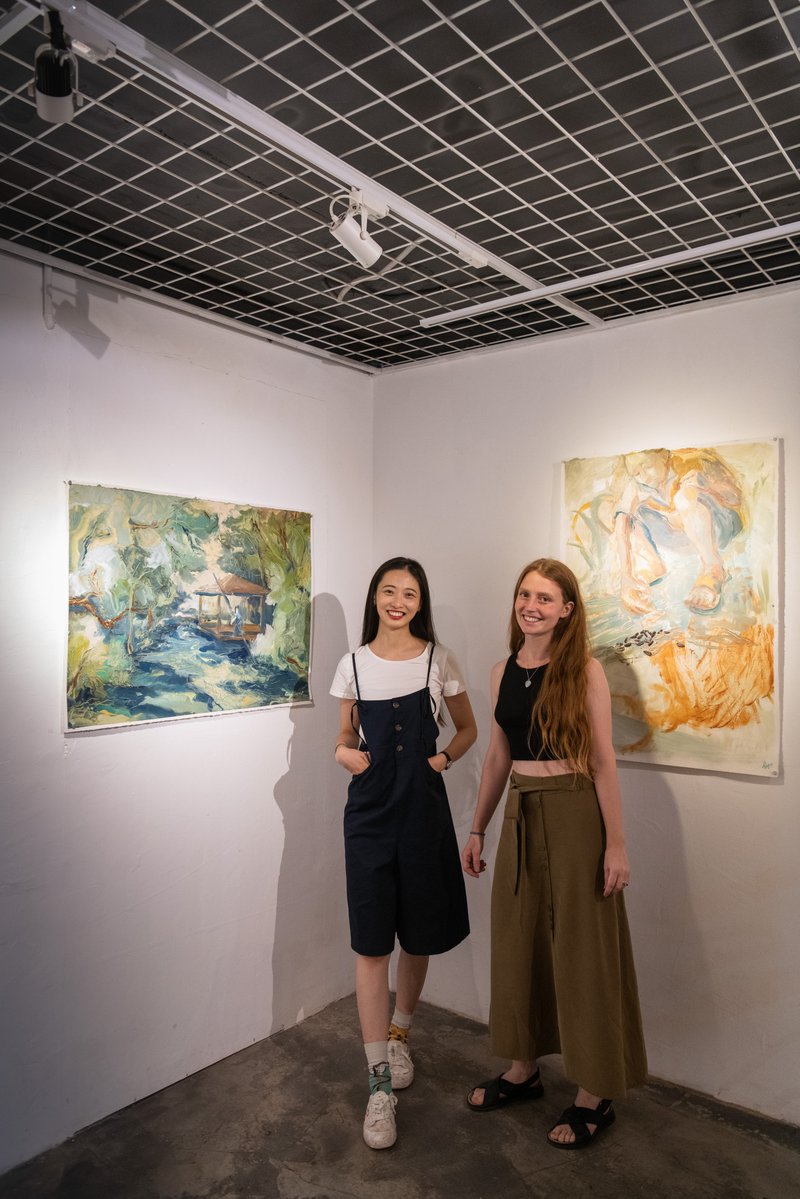 The artworks that I have made are a testament to the creative stimulation that can arise when leaving one’s comfort zone. For the final two weeks in China, Qiong and I went on a road trip through the dramatic landscape of northern Sichuan, the grassland plateaus and the Gobi desert. This trip made me realise that I had, until that point, only seen a tiny fragment of a huge and richly varied country. Leaving the city I experienced a patchwork of ethnicities and cultural traditions as well as a hugely varied and beautiful landscape. Although the road trip was less tangibly productive, leaving the studio was a great release and an amazing way to glimpse other sides of the country. 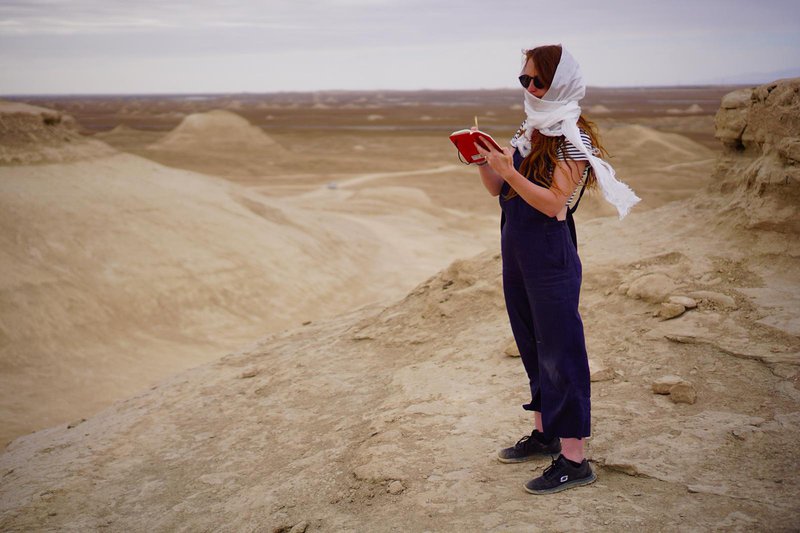 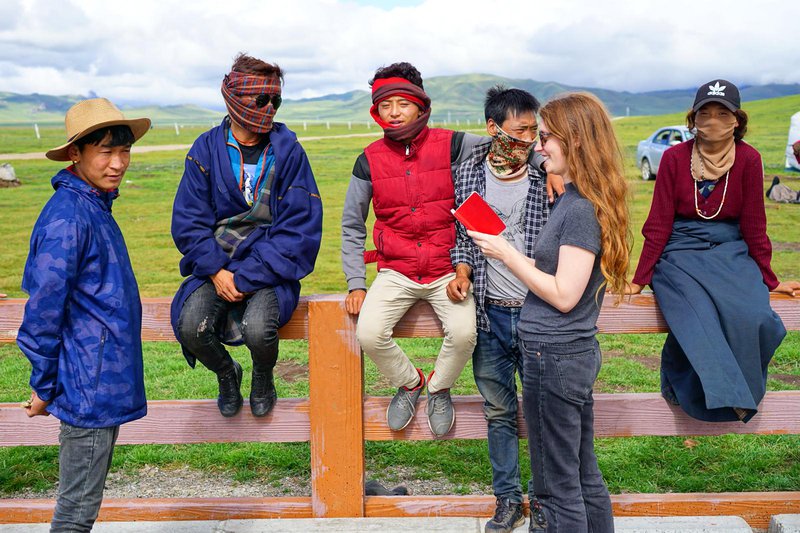 Two months after my return to the UK and the images are still developing. I am now able to interpret my experiences thoughts and feelings and reinterpret some of the motifs and images I was initially drawn to. The residency in China gave me fresh eyes and when I returned home I saw my own life in a new light too.

I would like to thank the Royal Drawing School, Elm Education and San Mei Gallery for this opportunity.

Wu Qiong and Rachel Mercer will be exhibiting the paintings made in China (including the images above) at San Mei Gallery. The exhibition ‘Fresh Eyes’ opens on 5th December 2019 at 6pm and will continue until the 16th January 2020.