This September alumnus of the Drawing Year, Nahem Shoa, opens his most recent curatorial project at Southampton City Art Gallery. Face of Britain asks the question: What does it mean to be British in 2020? 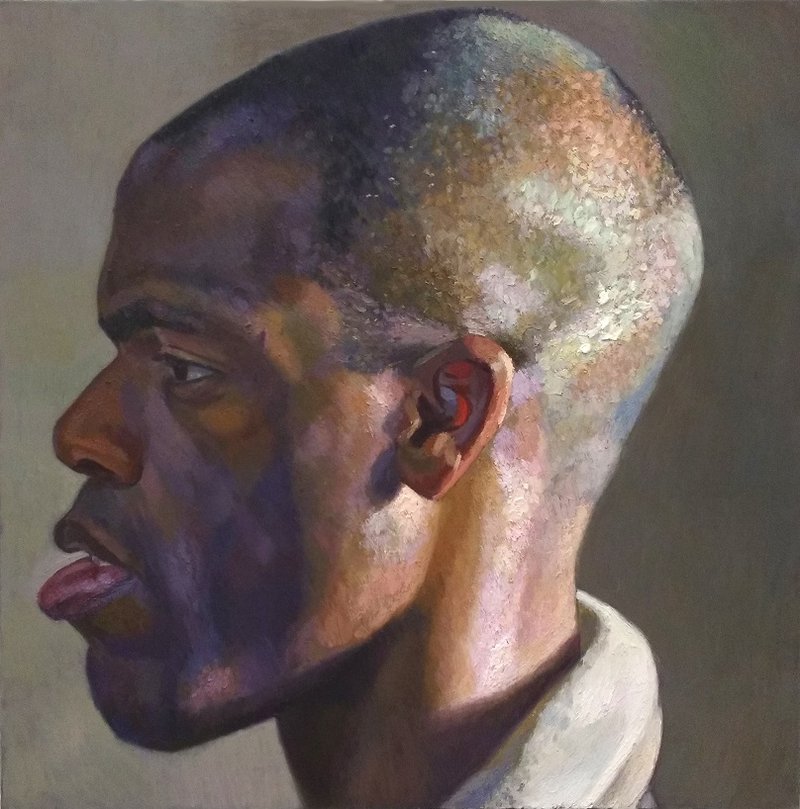 I made my first Giant Head painting after seeing the Lucian Freud Retrospective at the Hayward Gallery in 1987. It was a self-portrait maybe twice life size, which I spent the Christmas holidays painting from life.  Freud’s intense stare and his ability to bring new energy to the act of painting from life, was a big inspiration for me. I try to paint what I see and not what I think - and do it with real intensity. By painting a Giant Head from life you push the boundaries of what a portrait can be and it forces you to become a more subtle and complex painter because you have to analyse and translate something small scale on to a huge scale.

I have always painted from life and not from photography which, for me, is just a copying process, translating one two-dimensional surface to another. Trying to paint the third dimension is one of the hardest things to do well, but when it is you get some of the greatest art ever made; Titian, Rubens, van Dyke, Rembrandt, Velasquez, Goya, Auerbach and Uglow. 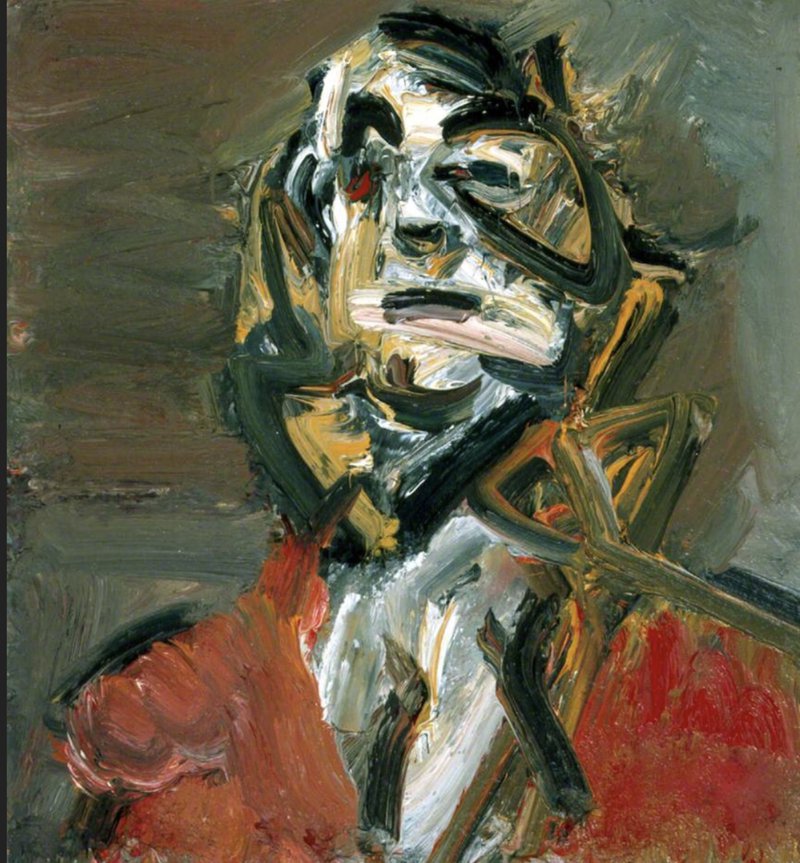 The Giant Head paintings took over a year to complete and were a massive commitment in time for my sitters and me. I couldn’t afford to pay people, but was lucky that the models all agreed to sit for free.  Each painting involved a lot of reworking; imagine putting 30 hours of work into an ear then realising that you are four centimetres off - that's three weeks’ work gone down the drain! Every aspect of painting a head 20 times life-size was a leap into the unknown, every mark a discovery of seeing and then finding a way to translate into paint. I want the first and last mark to be about observation and the paint to become a force of nature in itself. 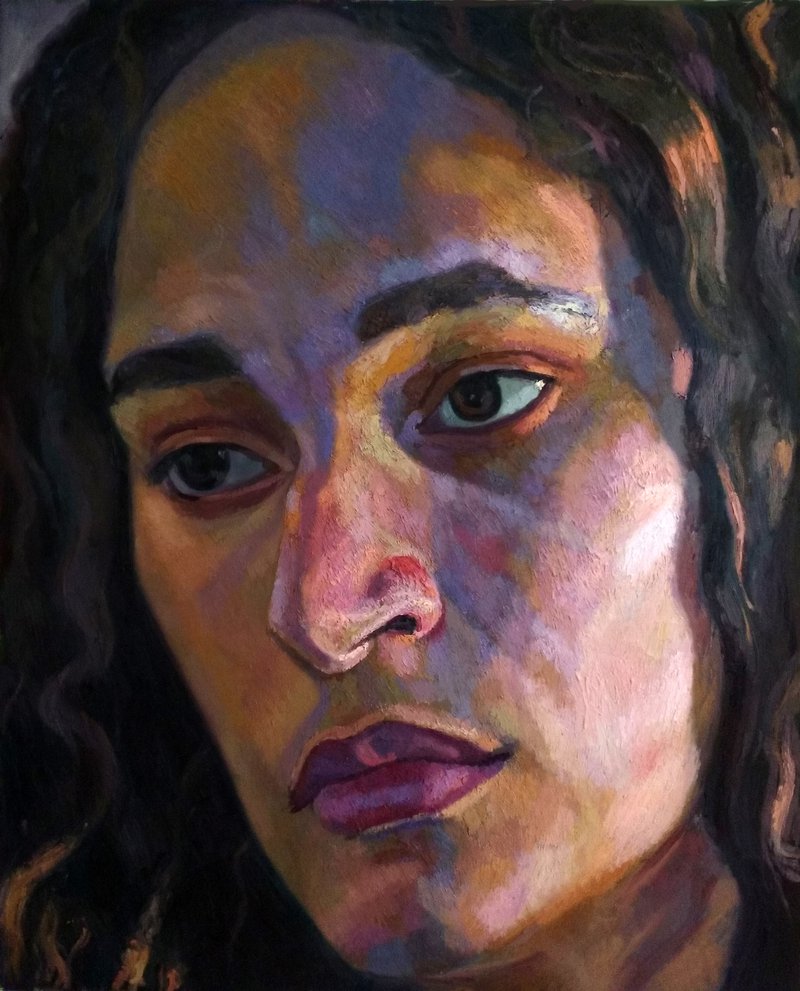 I started to paint Black and multicultural portraits because there are very few positive images in museums or art galleries in Britain and Europe and most of them are of slaves or servants, even though there has been a Black presence here since Roman times.  It has been one of my ambitions as an artist from a BAME background to readdress this imbalance through my painting practice and curatorial work.  From 1999 to 2007 I managed to paint 28 Giant Heads of BAME people, which were shown together in an exhibition called ‘Facing Yourself’, at the Bury City Art Gallery.

At the time I received a lot of racism from the art world and it made it impossible to exhibit this work, but since 2016 many of these portraits of mine have gone into major museum collections across England: The Laing, Newcastle; RAMM, Exeter; Sheffield’s Millennium Galleries; The Atkinson, Southport; The Herbert, Coventry; Southampton City Art gallery and the V&A.

My Black British portraits were all painted directly from life, with each portrait an investigation, through scrutiny of each sitter’s actual colouring and not falling into the assumption that Black people's skin is made up of black, brown and umber. I only use a hot and cold colour palette, which has no black, brown or umbers. 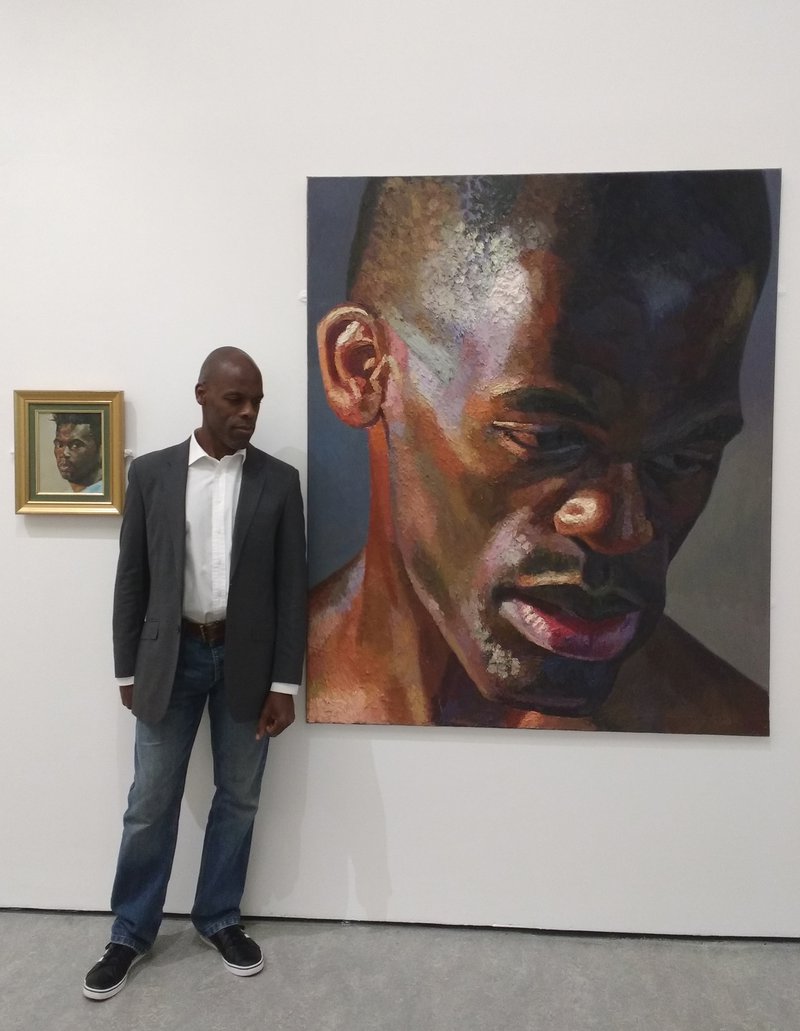 Face of Britain came about because the Southampton City Art Gallery had lent their painting of mine, Head of Desmond Haughton (Red Top), to an exhibition called ‘Black Presence’ at the Atkinson Art Gallery. It was hung next to the Tate gallery’s Joshua Reynolds portrait of Frances Barber. I sent them the Black Presence catalogue and they asked me to curate an exhibition with my portraits alongside masterpieces from their collection. I decided to pick outstanding portraits by British artists who I felt moved the story of portraiture forward. 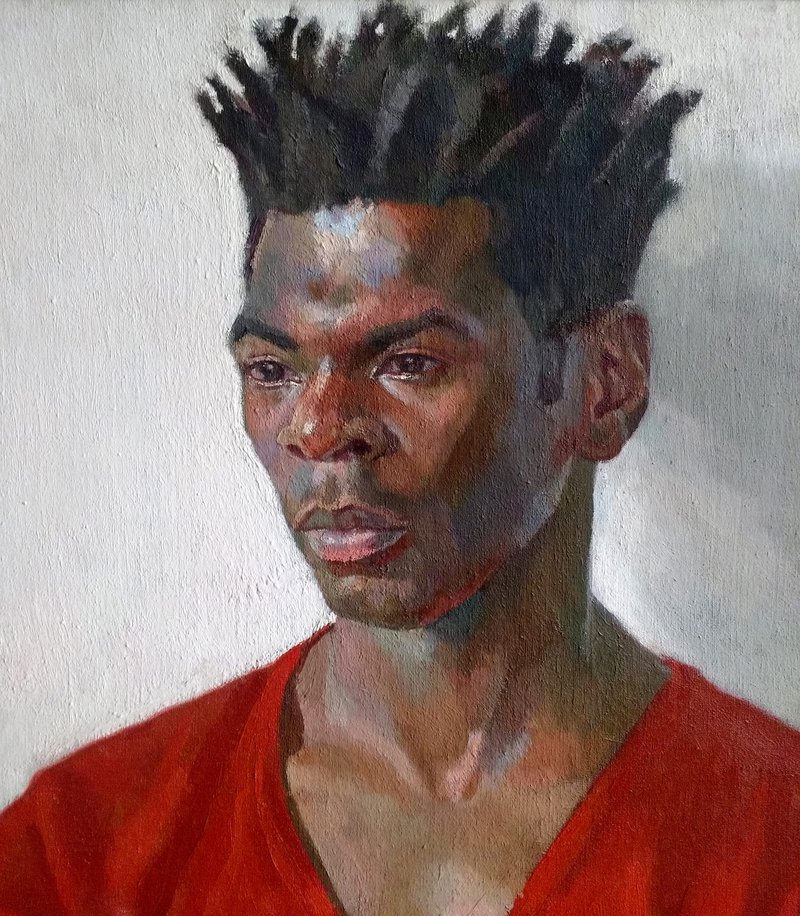 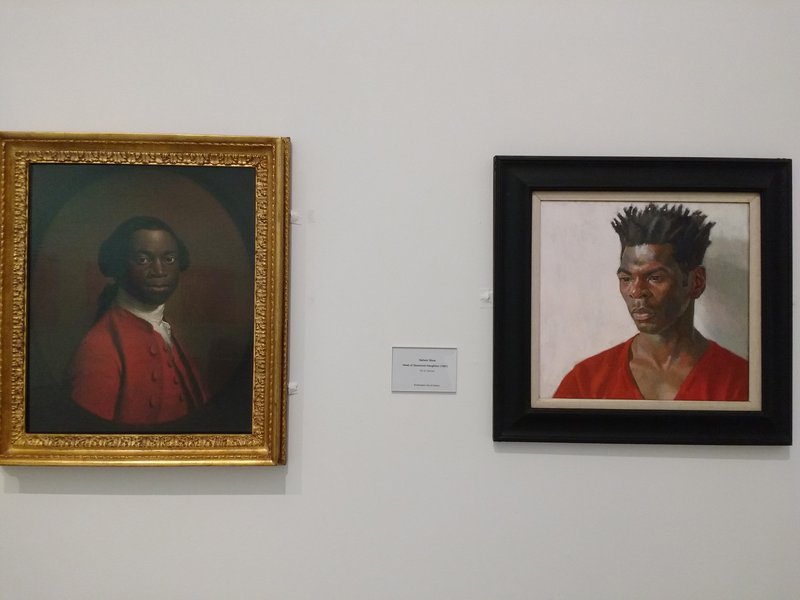 Install shot of Head of Desmond Haughton (Red Top) hung next to Portrait of an African by Allan Ramsay (RAMM collection Royal Albert a Memorial Museum and Art Gallery, Exeter) at the Atkinson Art Gallery.

I wanted to place a special highlight on Black and women artists who I felt have been neglected. I chose the portraits of Desmond Haughton and Louise Courtnell, who I consider some of the most important painters working today. I have hung Louise's self-portrait in the middle of Uglow and Sargent paintings because her work has incredibly scrutiny and also a Vermeer-like stillness. Desmond Haughton’s (also taught by Uglow) self portrait I have hung next to Van Dyke’s Portrait of a Man. My painting, Giant Head of Gbenga (2001) will be hung next to Chris Ofili’s Two Doo Voodoo (1997). Both images side-by-side will make striking contrasts as both paintings redefine what a portrait can be, but in very different ways. 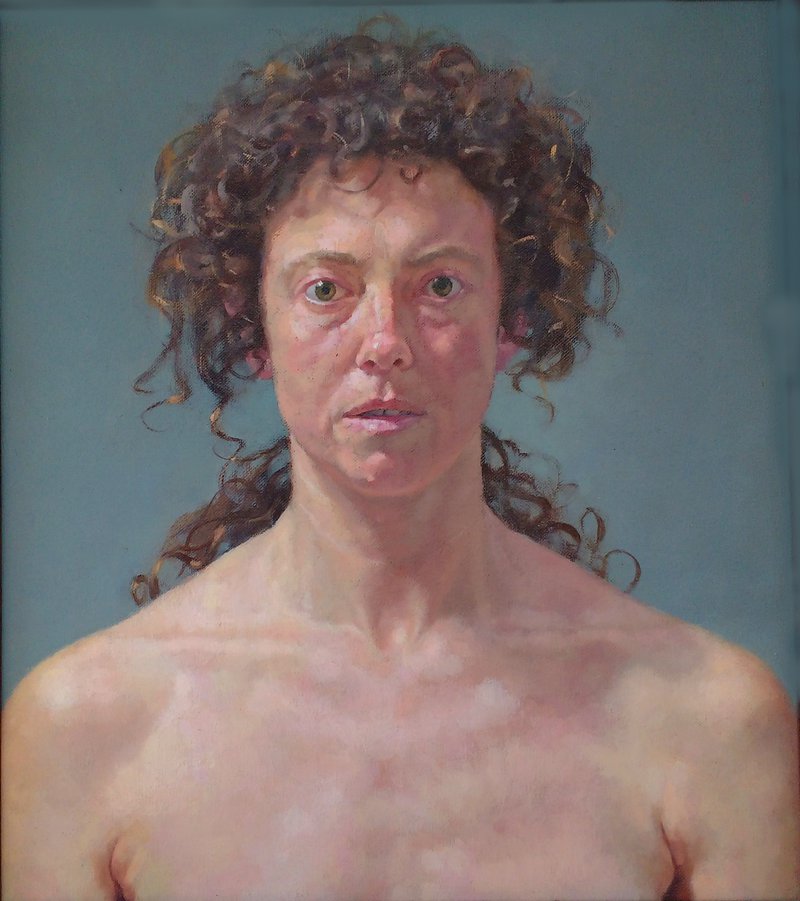 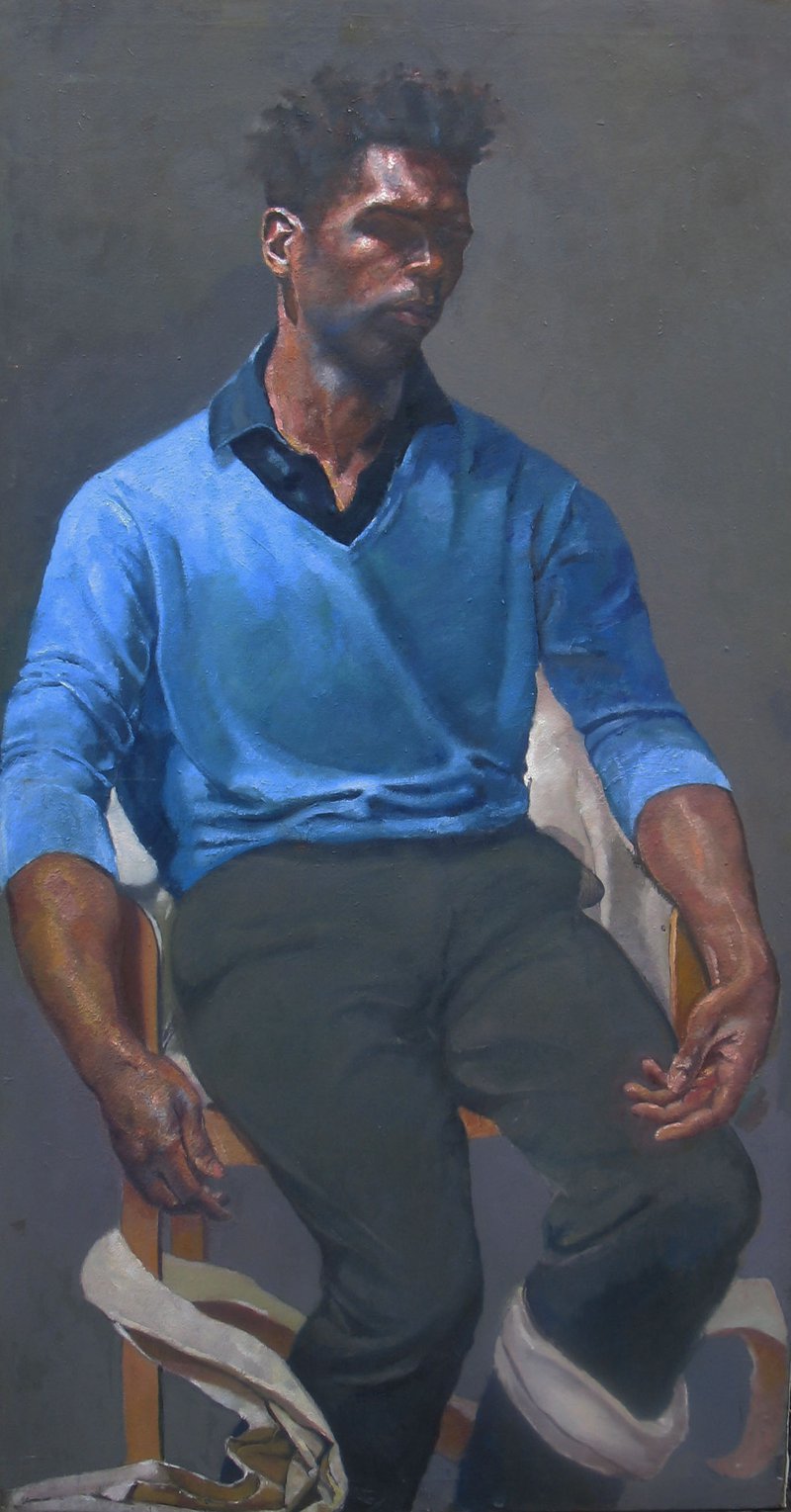 I tried to choose portraits from the collection that changed British Art, through modernism. Van Dyke brought a new painterly realism to the portrait, which was reinterpreted by Sargent with a nod to impressionism. Sickert’s self-portrait with its emphases on tone and raw mark making leads to Bomberg, Auerbach, and Kossoff. Gwen John’s revolutionary colour harmonies inspired minimalist abstraction. Mathew Smith’s art brought Fauvism with a bang to these shores. Desmond Haughton's grand self-portrait put the Black image on the same level as kings. For me the best portraits can change how we see ourselves. 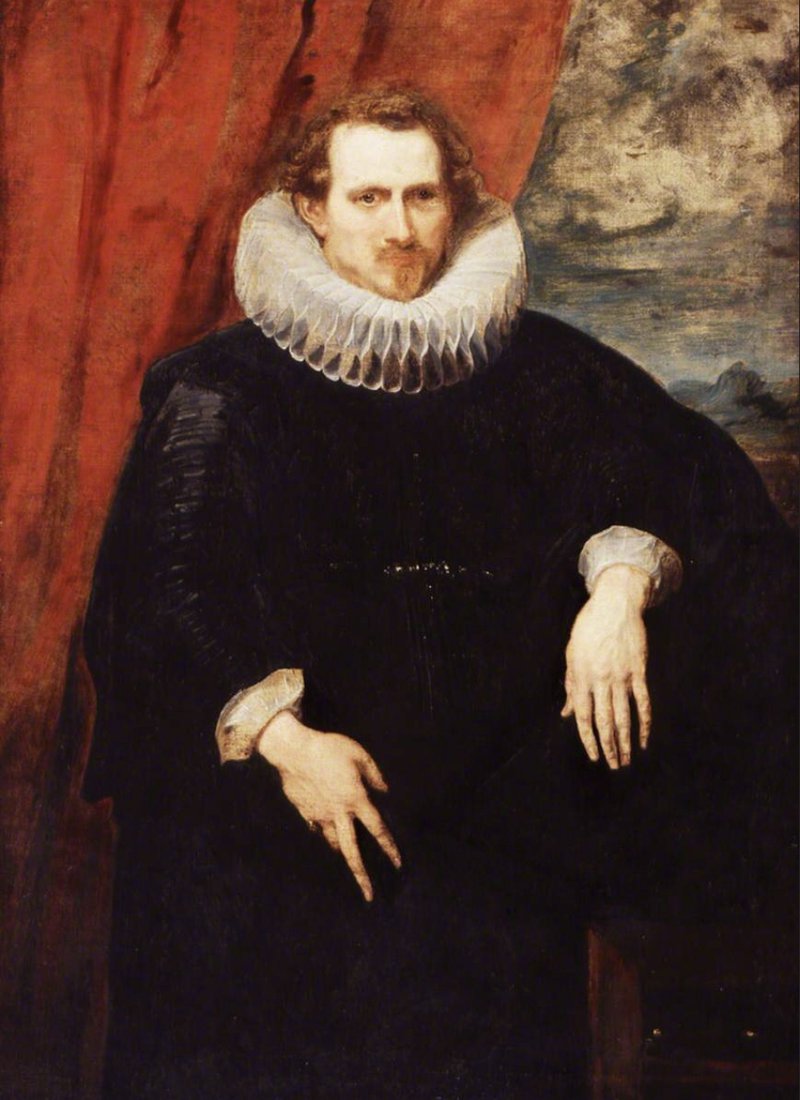 Of the 28 portraits on display, 17 are of British Black sitters - something that has never been seen in a portrait exhibition in this country. In light of the horrendous police killing of George Floyd in America and the Black Lives Matter marches that went all around the world we can see that this issue is even bigger than a global pandemic because it has never gone away. Every art institution has stated to stand against racism of any kind, which still needs to be proven, that there is a real commitment to change things.  Face of Britain is one of the most relevant portrait exhibitions to be staged in a museum in this country in this present moment.

In January 2021 I am showing my new work in an exhibition called Being With Trees in the Gustavo Bacarisas Gallery, Museum of Modern Art Gibraltar, Spain and in September 2021, The Walker Art Gallery will show a number of my Black British portraits with their permanent collection.