The large-scale power of the mural

Murals are often a revolutionary act, a political statement, a public piece of street art that can be viewed and interpreted en-masse as people go about their everyday lives. Murals prove that public walls do not have to be plain, and that art can be accessible for all to enjoy. Here, we look at some recent mural projects by Drawing Year students and faculty... 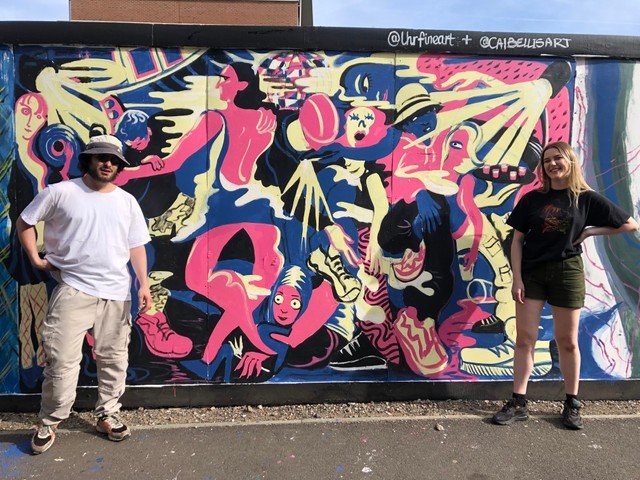 In May, the current Drawing Year students came together to paint a 120ft mural on Bard Rd, W10 in London. The students were led by tutors and artists Mark Cazalet and Deanio X, who worked with them in the studio to develop and translate their drawings to a larger scale and to be viewed in an architectural, public setting.

Mark told us, "Fraser Scarfe, Drawing Year Manager had suggested we programme in a mural day on our core Drawing Year programme one Wednesday. I wondered if this might not be an out-of-house real art work. I found a wall close to where I live in North Kensington and through a local arts curator, approached the owners of the land."

"The theme was loosely one of transformations. The students divided into teams of two, three or four, and a handful preferred to work solo. Within these groups the imagery was discovered through collaborative process over two days by making template designs at 2/3 scale." 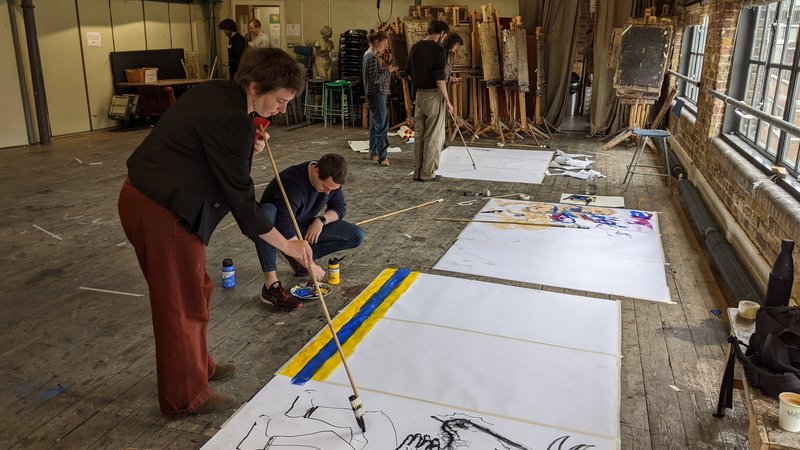 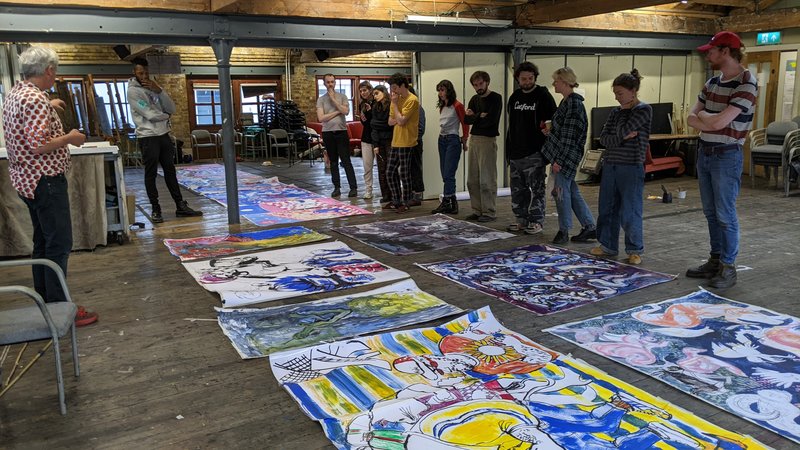 Mark's advice to artists who want to try working on a bigger scale would be: "Think about the viewing distance the work is to be seen at, who will be looking at it and the role of the materials. If you work small in watercolour, imagine your marks scaled up fifty times! You may have to exchange brushes for sponges or rollers. The feeling of walking past a mural is different to staring at a picture, so consider the kinetic sense of moving past a design, how it flows and the unity of the whole surface."

After the installation day on site, ⁠Mark told us, “It was a really fulfilling and productive day– the students felt it was a chance to engage in a different kind of professional practice and to work in a way where you get an immediate response from people passing in the street. Deanio X’s experience of working on murals and street art was invaluable. Thanks to all those involved locally for the opportunity!” 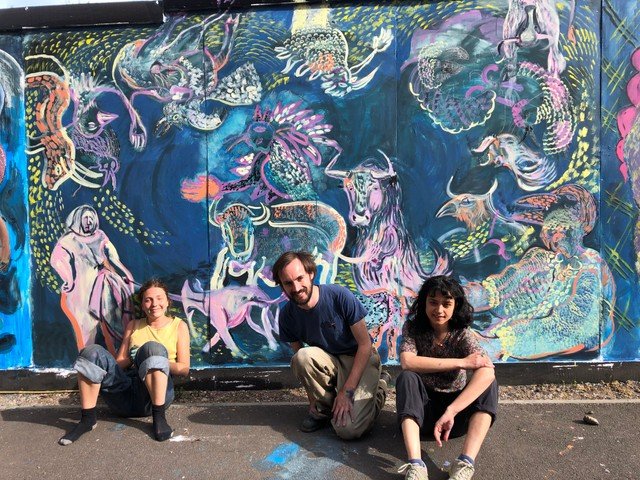 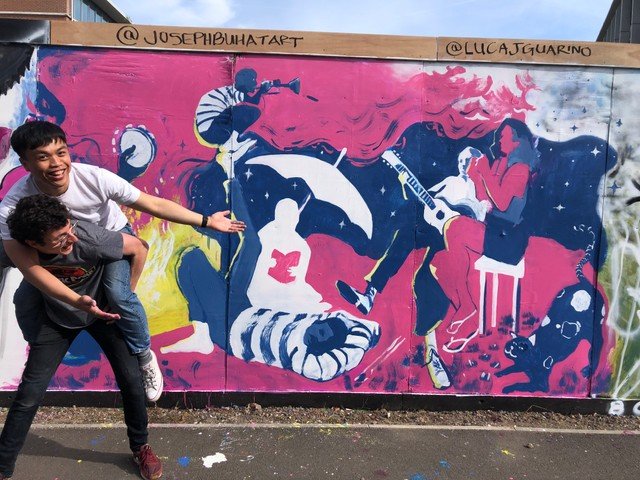 The mural will be up indefinitely, but it's probably best to visit in the next couple of months. ⁠ 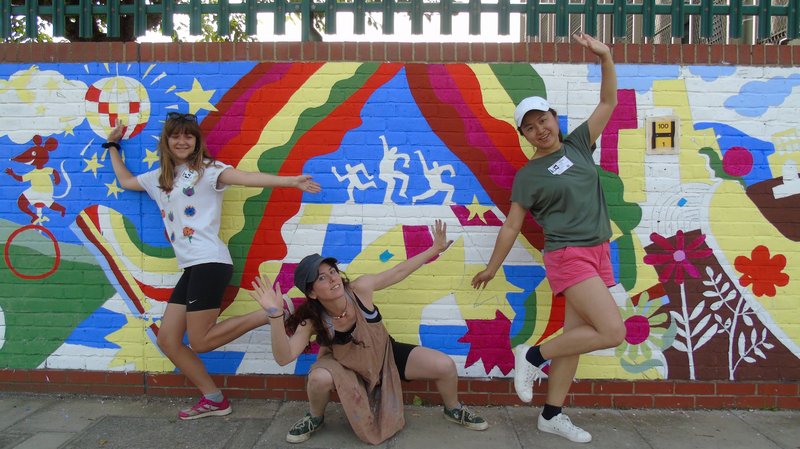 Viola Wang, our Drawing Year 2021 alumna recently project-managed a Walk to School mural in collaboration with Cross River Partnership and Cayley Primary School in Tower Hamlets. Here she describes how she found working on such a large-scale project.

"During my last term on the Drawing Year at the Royal Drawing School, I heard about this project through the Alumni Newsletter. It was a great opportunity and I was really thrilled to apply and receive the commission.

This has been the largest project I've been involved in and a steep learning curve. From the material, to the planning and producing the final mural; there were many logistic challenges throughout, such as weather, location and timing. Together with my Drawing Year 2021 graduates Allegra Fitzherbert, Isabel Garfield, and Zuzanna Pedrasik we, as a team, installed and completed the mural in May." 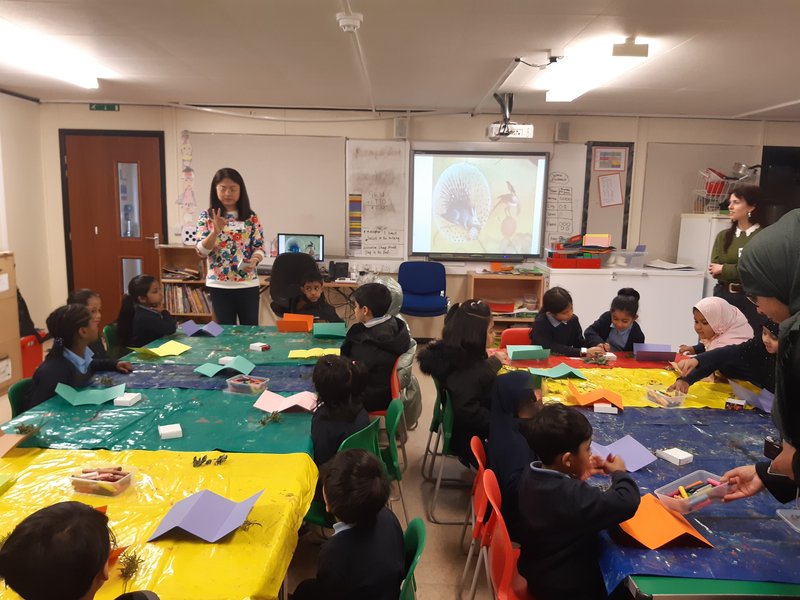 "The children at Cayley Primary School were the leading force of this mural. At the beginning of the project, together with my project partner Allegra, we designed and ran a series of creative workshops. Through these we were able to gather ideas and inspiration from the children at the school.

The overall design of the mural was divided into five different themes: love of nature, joy of sports, rainbow disco, re-wilding London and a walk in space. The themes helped us to focus on one stretch of the mural at a time, enabling us to work in sections. Each section had an artistic lead, and the other artists and children were then able to follow this direction. This allowed the production process to run smoothly and collaboratively.

At the final stage of painting the mural, we invited the children to come and join us at the wall for the painting. Their enthusiasm and encouragement made our project an enriching experience; we were deeply moved by their trust and love. Many of the key elements of the mural were near to ground-level, so it was a back-breaking task for all of us adults. Our little helpers were able to relieve us of some of this stress, as well as adding much more exciting detail than we could ever do, as you can see in this short film!"

"The completed piece is six feet high and 60 feet long, it covers a stretch of the wall leading to the school gate. Instead of considering the mural as one static image, from the beginning, I had the idea of providing an experience for the children who take this walk to school. The mural not only provides a view for other people and local residents who are passing by the school gate, but most importantly the main viewpoints are at the height of a child viewer. They can enjoy it while walking along, spotting animal characters, plants and insects at their level.

It has been a great experience for all of us, to be able to apply our skills right after graduation. We are really proud of our project and collaboration." 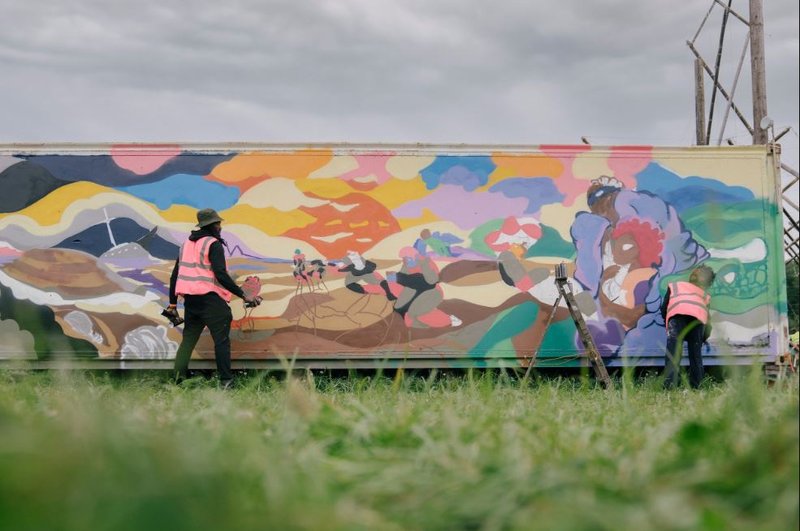 Our tutor and Drawing Year alumnus Deanio X regularly uses large-scale artworks and murals as part of his practice. One of his recent projects as part of BLKBOX Collective took place in the Shangri La area of Glastonbury Festival, which had the theme of We The People: Community, collaboration and hope for the next generation.

The mural series evoked an imagined collective memory space that stores suppressed visions from the past.

BLKBOX PART I., MURAL. In this scene, emerging generations' seek and rescue lost knowledge from the BLKBOX to nurture positive impact in the present. 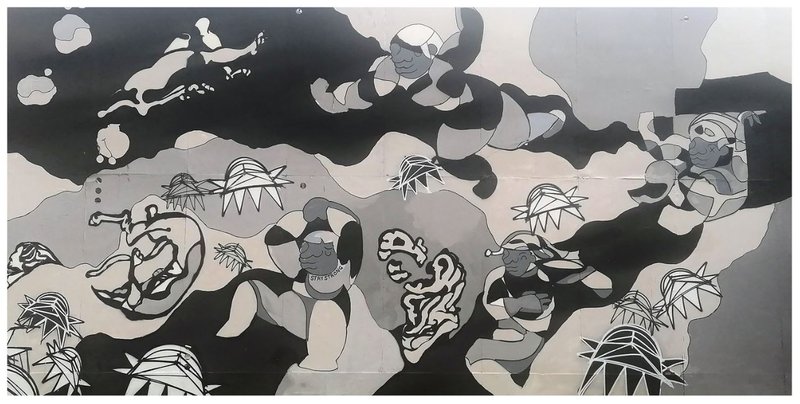 BLKBOX PART II., MURAL. In this scene, trapped spirits burst free from the BLKBOX to form new identities and chase their dreams.

You can also see some murals by Deanio X in support of front-line staff of the Covid-19 pandemic in our previous blog.

And finally... a mural fit for a Queen

Although not technically a mural, in celebration of the Queen's Platinum Jubilee in June, we commissioned Drawing Year 21 alumna Shana Lohrey to produce a mural-style banner artwork that we could share on Instagram.

Shana pulls inspiration from personal experiences drawing at street celebrations, such as Notting Hill Carnival, Chinese New Year, light festivals in Japan, as well as her childhood experience of following the colossal mechanical elephant- ‘the Sultan’s elephant’ by the Royal de Luxe Theatre company which paraded down Pall Mall in 2005. Shana did quick drawings whilst collecting and researching to capture the flow of movement and energy. ⁠

Shana explains, "whilst researching I came across a fact that the Queen owns all dolphins, whales, swans and sturgeon fish in the UK, hence why I decided to include a sturgeon. There is in fact a lamp post sculpted after a sturgeon fish near the Houses of Parliament too- the more you know!"