Meeting Points is a two person show of paintings by Sharon Beavan and Gethin Evans. Working figuratively and from similar points of departure, the exhibition explores where their practices converge and diverge. Both artists share a long history of working from observation and a fascination with the visual world and how to show it; from the city and the people who live there to the Scottish landscape of East Ayrshire. They explain that whilst they each make often extensive and frustrating detours in their working processes, the detours are determined by quite different interests and references.

The Meeting Points in this exhibition are shared preoccupations with urban existence, colour, drawing and how to address concepts of the traditional and the contemporary in painting. 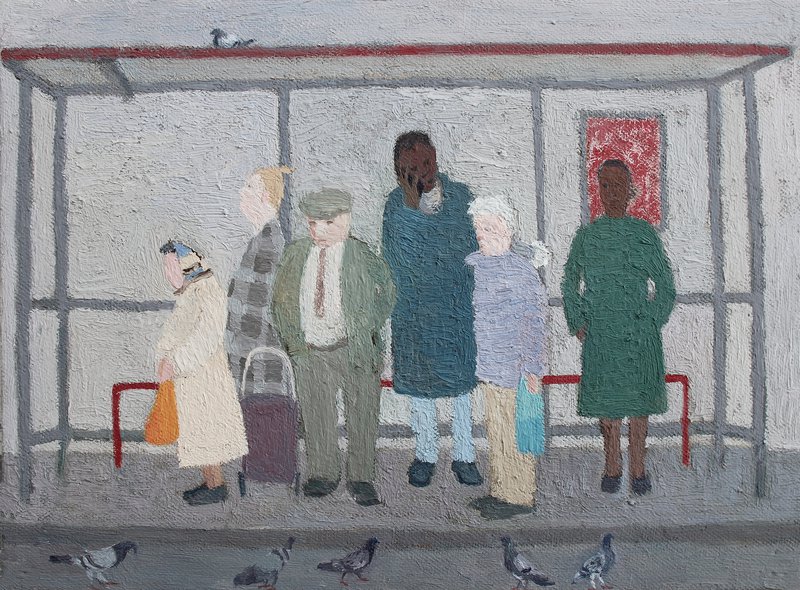 Sharon Beavan / The figure paintings build on some forty five A6 sketchbooks of people that I have maintained since 1980. I am interested in finding ways to show the figure that are neither photographic nor academic. I look at Giotto, Masaccio and Guston and moments in the everyday that for some reason move me. I continue to work on my painting ‘The View From Blackfriars Bridge to Westminster Bridge’ which has been my preoccupation since 1990. The intention was to take an idea and push it as far as I could. A protracted deviation through drawing led to significant changes in the way I saw and expressed space and movement.

After completing the Foundation course at Hertfordshire College of Art and Design, Sharon Beavan studied at Falmouth School of Art and the Royal College of Art. Selected Group shows include Cache at Angus Hughes Gallery, curated by Richard Burton; Various Species curated by Graham Crowley at Greystone Industries Suffolk; Territories at Galerie Windcracht 13, Holland curated by Gethin Evans and Visions of London at Art Space gallery curated by Michael Richardson. Sharon has exhibited her drawings at The Drawing Gallery and has shown regularly at the Royal Academy Summer Show where her painting Vaping Man was ‘Painting of the Day’ in 2019. She has also exhibited in the Jerwood Drawing Prize (previously the Cheltenham Open Drawing Competition) where she won first prize in 1985. In 2012, Sharon became a co-founder of The Foundation Year at The Royal Drawing School and in 2016 curated Short Stories, an exhibition of three women painters. Sharon has work in private and Public Collections, including the Victoria and Albert Museum, Guildhall Art Gallery and Museum of London. 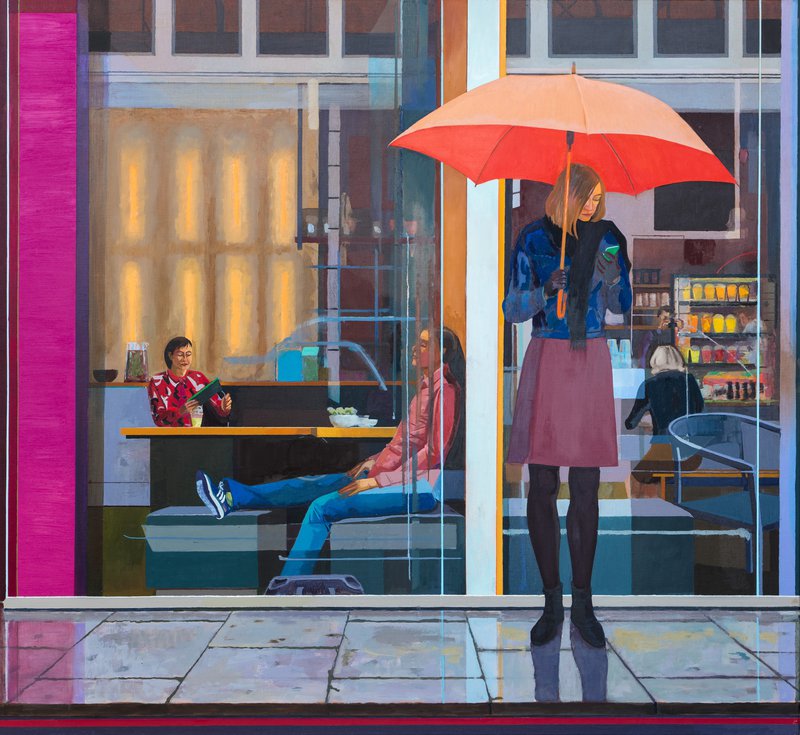 Gethin Evans / The series of figure paintings are constructed using particular people and places as a source - often the idea arises from small thumbnail drawings and photographs of something observed. The idea then evolves over a period of time, through extensive drawings and colour studies, towards an image that establishes an oblique narrative. A sense of theatre, light and mood guides the imagery. The ‘magic hour’ of dawn or dusk can be seen as forcing a hallucinatory experience, but the harsh light of a Mediterranean noon or a city backdrop with brewing storm, can also enforce a feeling of ‘dislodged reality’.

Gethin Evans studied Fine Art Painting at Camberwell School of Arts and Crafts after completing a Foundation course at Byam Shaw School of Art. He then went on to The Slade School of Fine Art for Post Graduate study. Selected group shows include Assemble at Tregony Gallery in London; Cache curated by Richard Burton at Angus Hughes Gallery; Urban Contemporaries curated by Ferha Farooqui and Frank Creber at Espacio Gallery; Alignments curated by Derek Marks at Espacio Gallery and Compass curated by Emily Artinion at Street Road Artists Space, Pennsylvania. Gethin has exhibited most recently in the Creekside Open Exhibition (2018); The London Group Open (2017); Sunday Times Watercolour Exhibition (2016) and the Royal Academy Summer Exhibition (2016). In 2012 Gethin curated Territories, an exhibition of 12 artists held at Galerie Windcracht 13, Den Helder in Holland. He has taught on the Drawing Marathons at The New York Studio School and in 2012 became a co-founder of The Foundation Year at The Royal Drawing School. Gethin has work in private collections in the UK and abroad and exhibits regularly with the Tregony Gallery, Cornwall.