Joana Galego is the 2018/19 recipient of the Sir Denis Mahon Award. Presented annually to an outgoing Drawing Year student, the award supports them in making new work and developing their practice, culminating in a solo exhibition in the School’s Shoreditch gallery. Here, Joana reflects on the past year and the preparation for her exhibition, Spring and All. 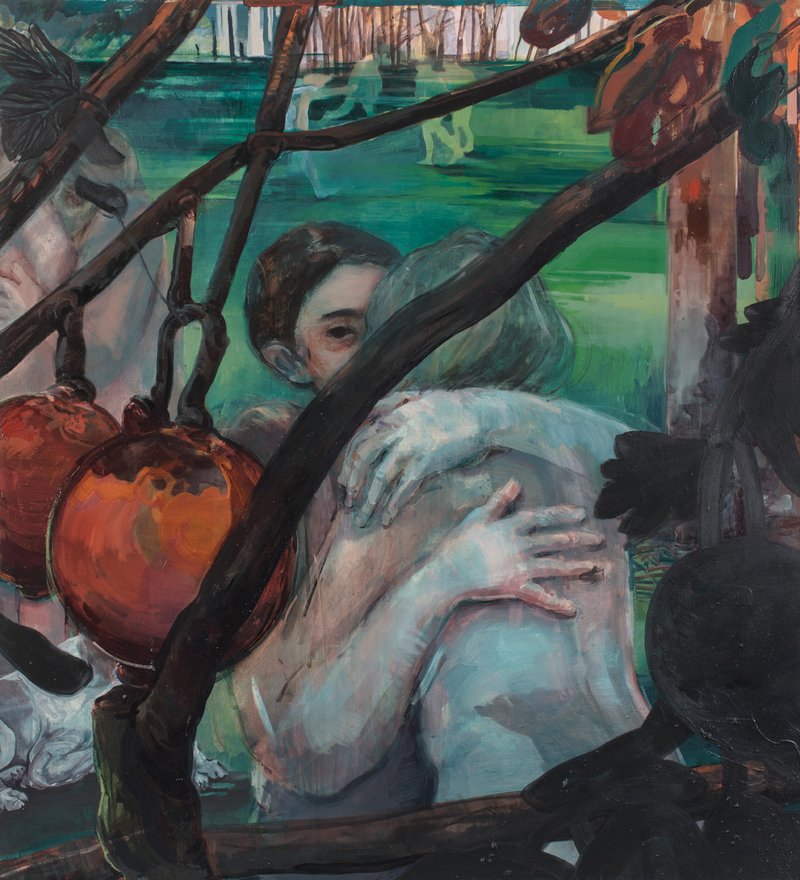 I just finished wrapping twelve months of work for the exhibition I decided to call Spring and All. Paintings, drawings and sketchbooks, ready to take tomorrow morning to the Royal Drawing School. How will they look within that gallery’s white walls?, I wonder. This weekend of laboriously wrapping and protecting my own works - objects and images I was surrounded by for a whole year - brought a new feeling of accomplishment and gave rest to the excitement, preoccupations and nervousness that I’m guessing always precede a solo show. 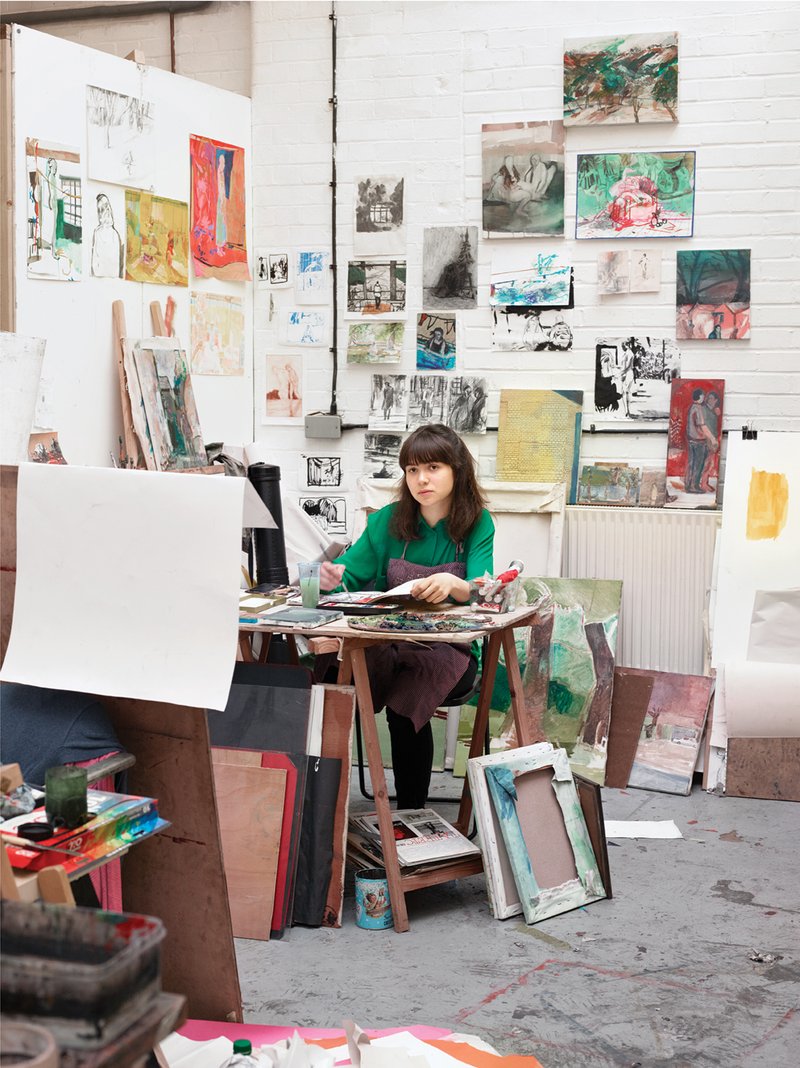 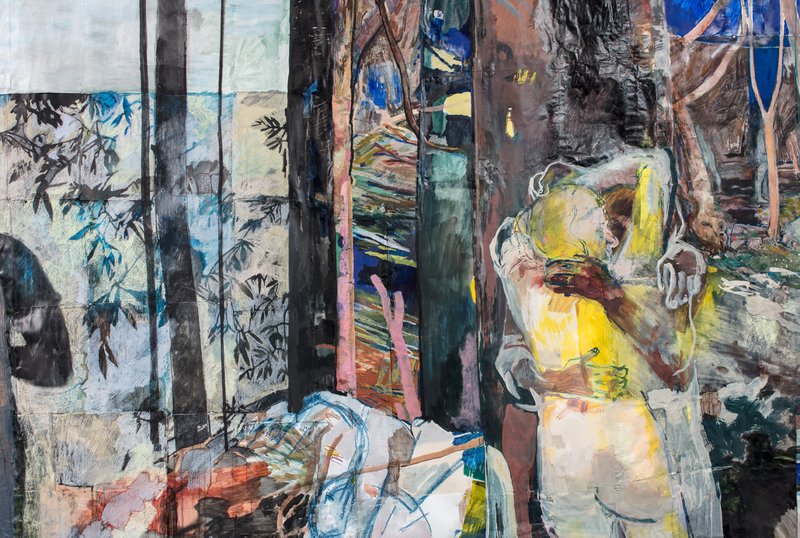 I think I might, mixed media and collage on paper

It is difficult to describe what I felt when I learnt that I had received this opportunity. I was surrounded by classmates and friends who I admire and look up to, in a School  in which I had not only learnt a great deal but where I was very happy, in a city I don’t quite belong to, but that feels like home. Receiving the Sir Denis Mahon Award allowed me, on that special night of our final degree show, to decide that I would stay in London for another year, closer to many of those artists and friends that inspired me (and still do) and the museums and galleries that put me face-to-face with the work of the artists who always influenced me. 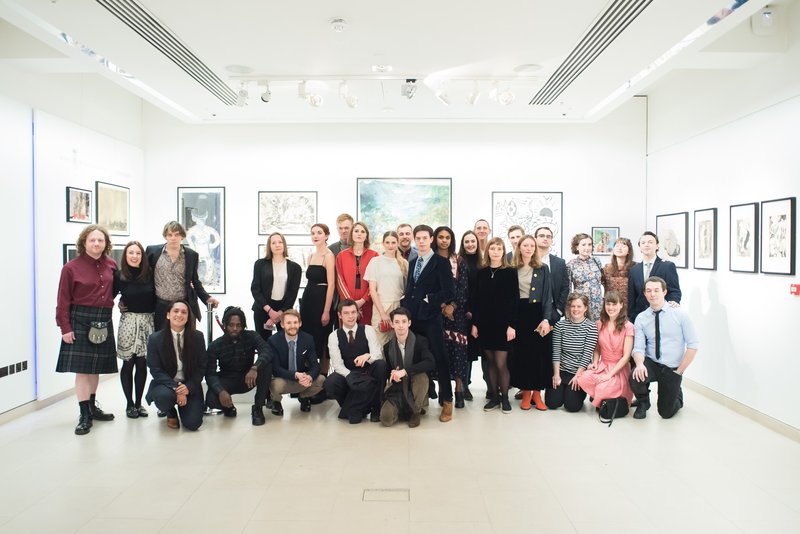 Joana (back, second right) with her Drawing Year 2016/17 classmates 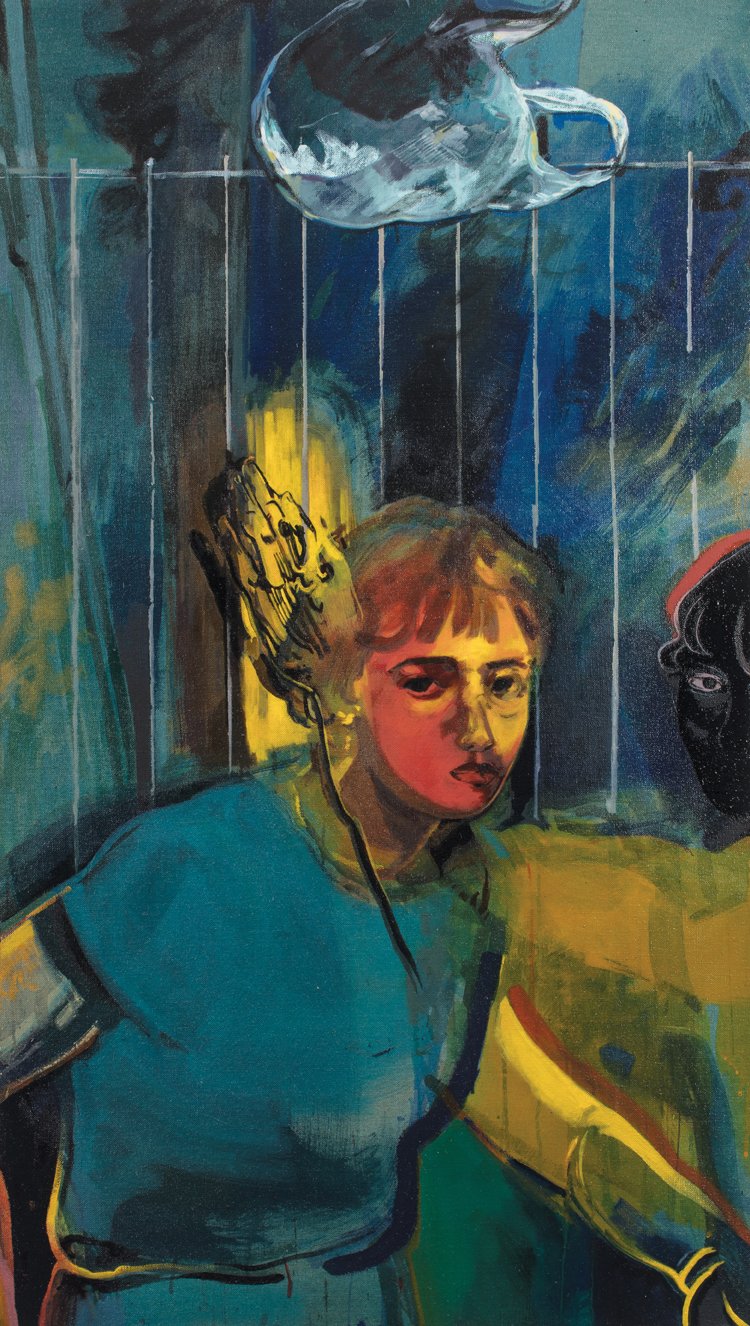 From observation (with plastic bag), Acrylic and oil paint on flax, 159 x 90 cm

It is no understatement, then, to say that the Award changed my life. After The Drawing Year I started looking for a studio in London with some of my former classmates, Alice Macdonald and Isaac Nugent. We eventually found a building in Lewisham with various vacancies and I rented a small self-contained studio which would become the place I spent most of my days for the last twelve months. As I wanted to be as close as possible to my work I ended up finding a room in the area as well. The Award permitted me to have a part-time teaching job only two days a week, allowing me to fully dedicate myself to drawing and painting, to the special relationship between the two, still quite mysterious to me. Where does one end and the other one start? How to move from my little thumbnail sketches, sometimes so appropriate to express a thought or a feeling (very difficult to pin down otherwise) to the canvas? 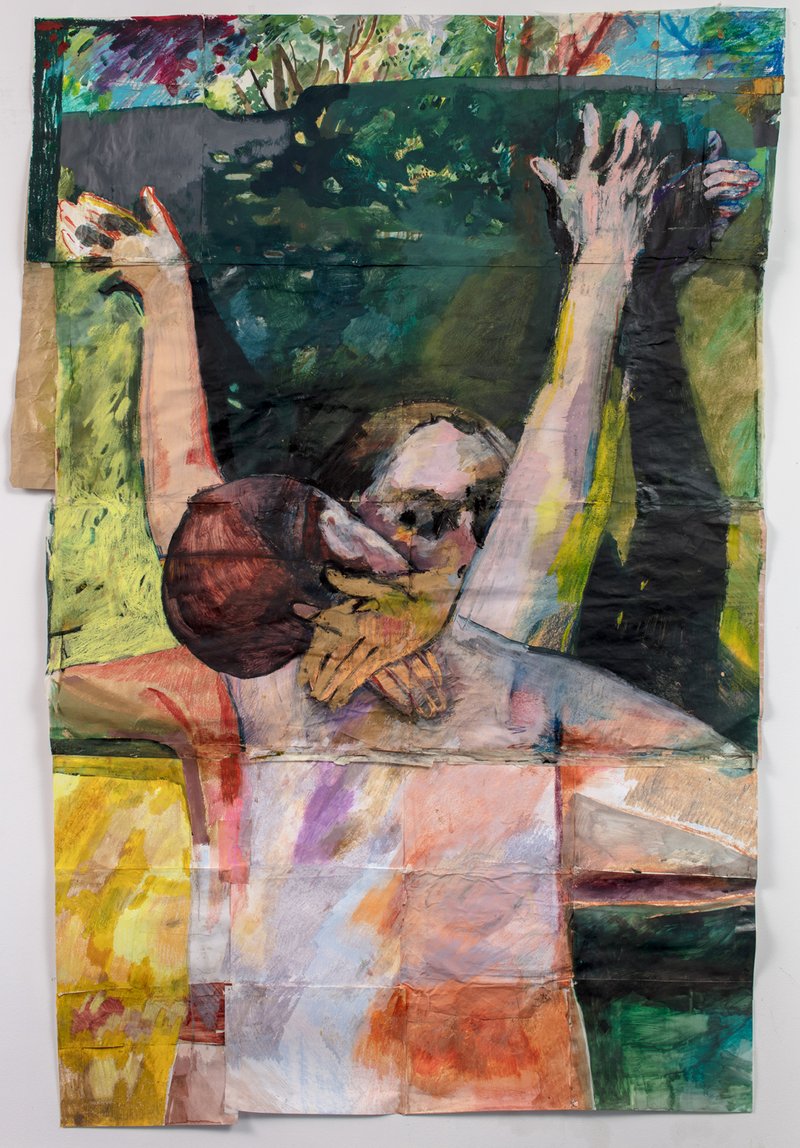 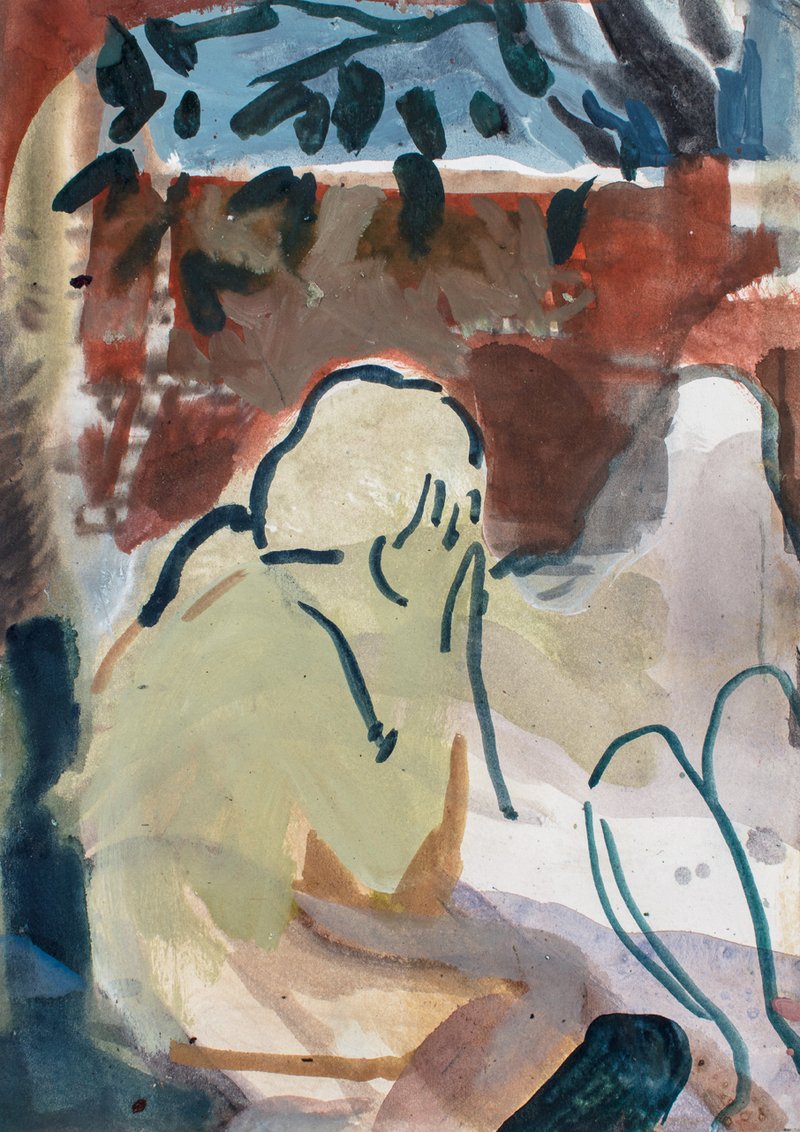 At first I was very interested in pursuing something I had started exploring at the end of The Drawing Year; a mixture of drawing and collage on paper, works that started on a single A3 sheet and then spread out as needed. I enjoy mixing everything: charcoal, soft pastels, acrylics, watercolours, ink, oil pastels, pencils, pens. Cutting, reshaping, moving things around. I worked on multiple pieces at a time, swapping between each other as I got scared or stuck, and when I write scared it isn’t always in a negative way, as excitement and surprise can have that effect on me. I’ve often felt that there was nothing more rewarding than having the work, suddenly, unexpectedly, looking back at you - the magical moment of finding something I didn’t know I had been searching for. 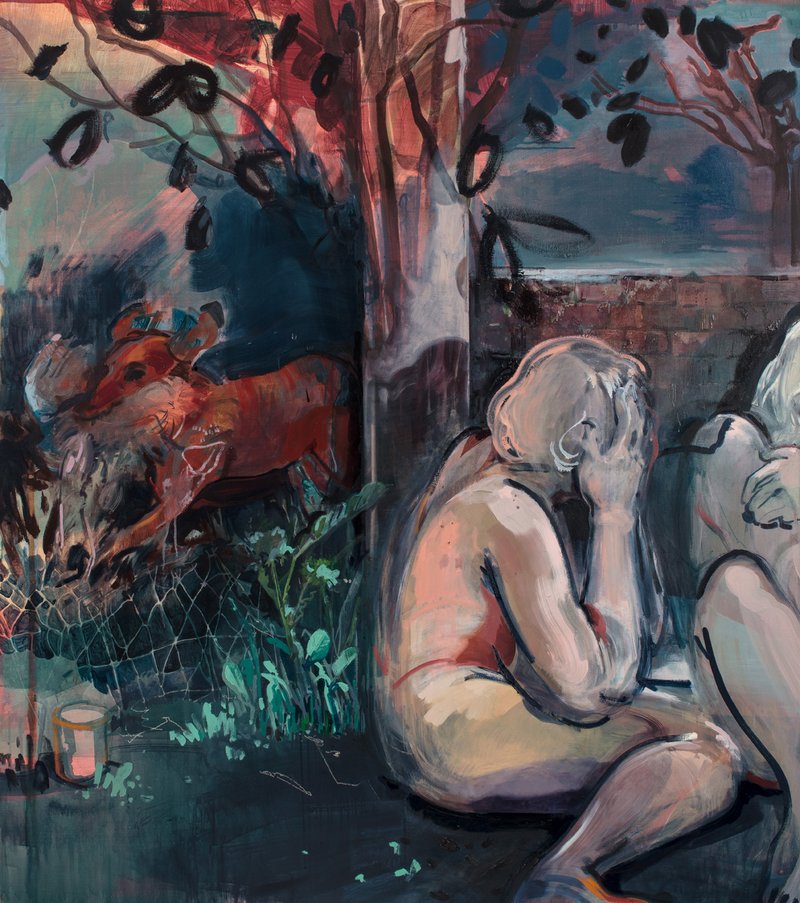 These large works on paper proved to be, however, quite difficult to store and I started to try to find that same ease of moving things around on canvas instead. Why did I always feel more intimidated by the latter, why didn’t I feel as defiant and adventurous as I did with paper? This is something in which the Award played an important role as well. Gradually, over the course of the year, I started to lose some of my initial shyness towards materials and started to paint on a bigger scale, something I’ve always wanted to try. I also started using collage on my paintings and introducing pastels and charcoal on top of the oils. 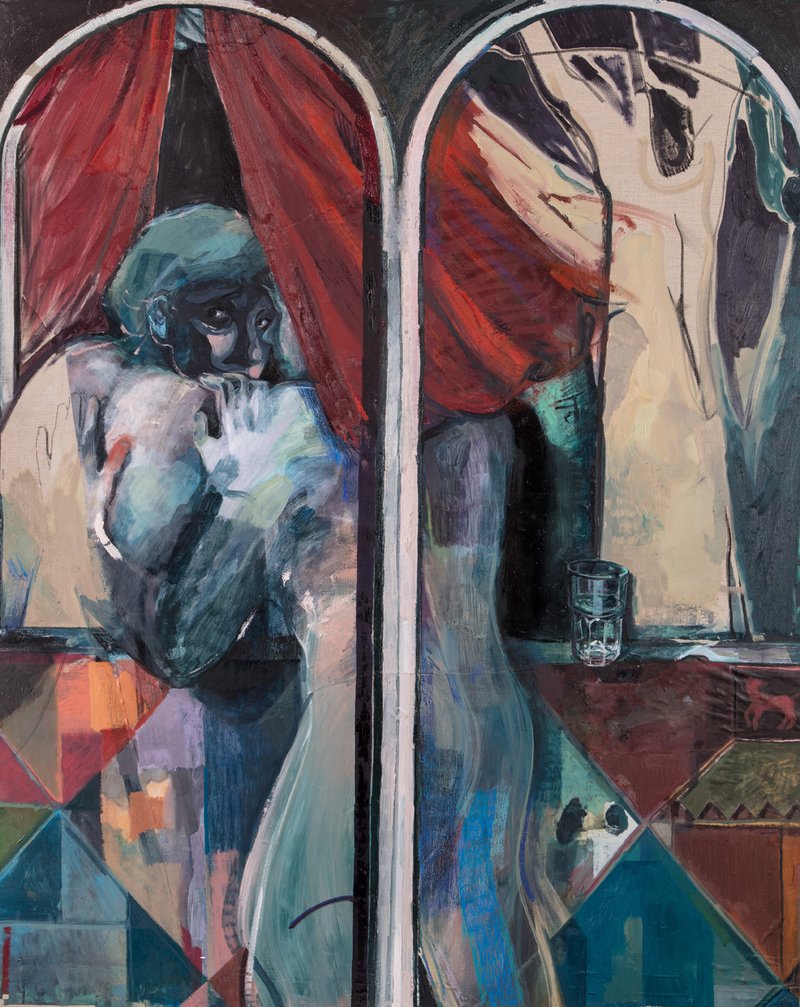 It couldn’t have been a more formative year, full of failures, technical problems (be careful when you decide to paint on your grandparents’ bed sheets, they may be very difficult to stretch), but equally full of risk-taking, learning and discovery. I believe I learnt about confidence, routines, discipline and balance: some of my best days started with a swim before cycling into the studio, then a cup of coffee looking at the work, painting until one, lunch with Isaac and Alice who were working next door, painting in the afternoon into the evening and finally cycling back home with the moon high above. Other days I stared and stared and it would seem that I couldn’t do anything right. I learnt how helpful it can be to take a break and go for a short walk, leaving the four walls of my little studio for a while. On such times it especially paid off to go into town and visit London’s many museums and art galleries, as it always made me come back with a fresh eagerness to try something new. 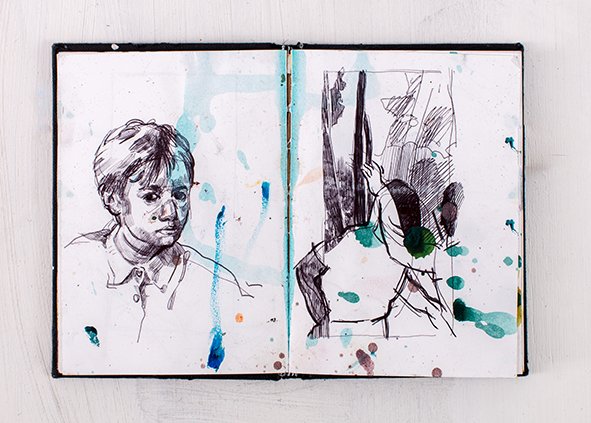 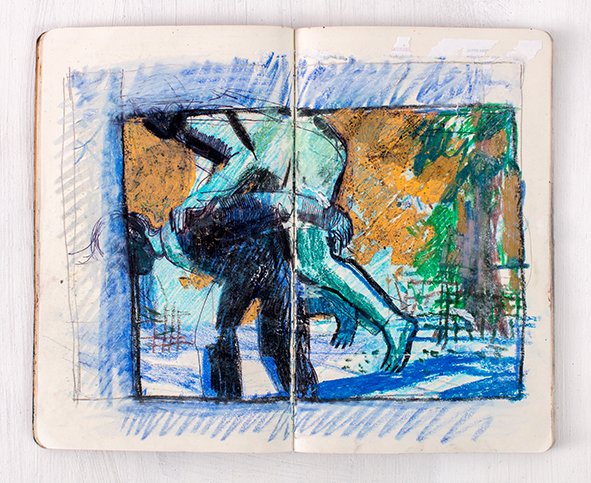 Drawing has always been at the core of my practice, as a starting point and as a guide along the way. Whenever I found a problem in a painting I tried to solve it by drawing, testing compositions and colours. I painted mainly from drawings, which resulted from a combination of observation, imagination and elements drawn from reference photos.

To me the last twelve months constitute a very important chapter of my life, in which I tried to invest as much as I could into the development of my paintings, based on my drawings. The Sir Denis Mahon Award offered me the chance to learn and hopefully improve by doing and I couldn’t be more grateful for the opportunity. 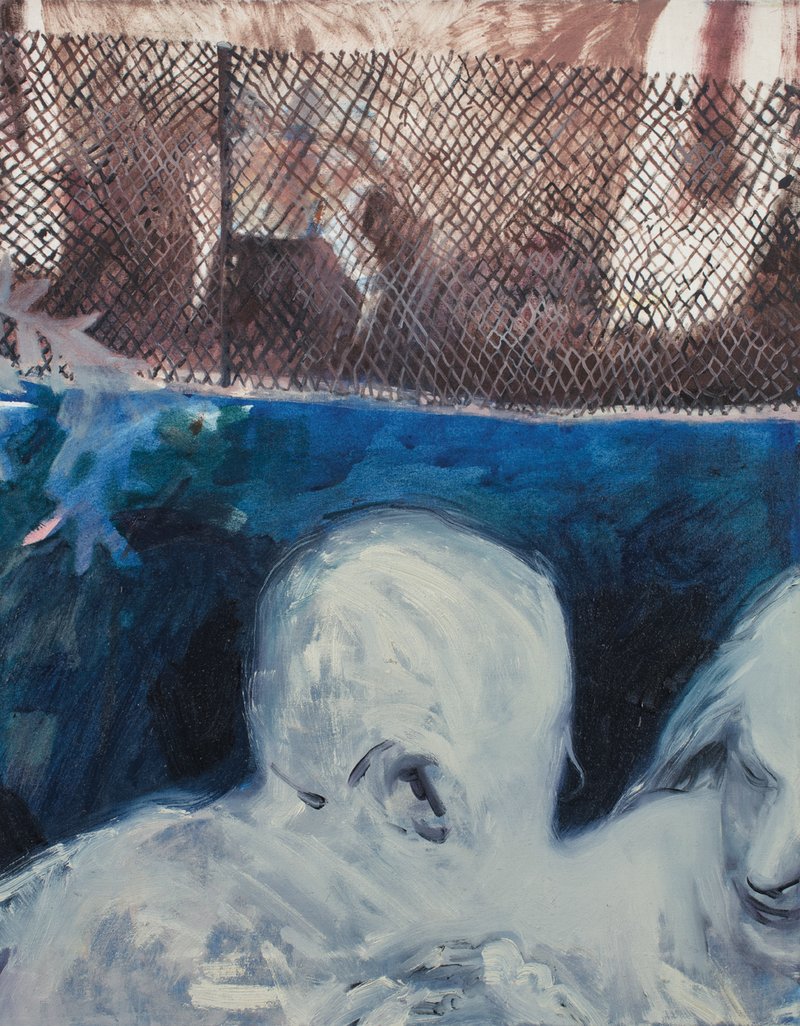